Nextdoor Steps In Line To Go Public Under Ticker 'KIND' 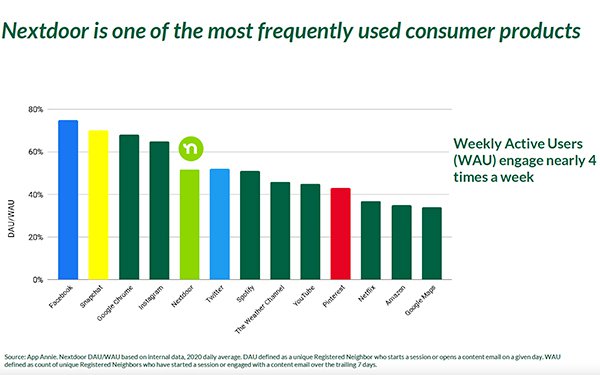 Nextdoor, the neighborhood network, plans to become a publicly traded company through Khosla Ventures Acquisition Co. II, which will serve as a special-purpose acquisition company (SPAC).

On closing of the transaction, the combined company will be listed under the ticker symbol "KIND." The transaction is expected to close in the fourth quarter of 2021. A specific date has not been set.

The idea is to accelerate growth and create stronger neighborhoods through search and social interactions, as well as increase hiring.

The company plans to drive growth by adding neighbors in its network by introducing new products and expanding in markets worldwide; making it easier to engage, share interests, and create meaningful connections; and increasing monetization on the platform by scaling proprietary advertising platform to service clients from the largest advertisers in the world to small local businesses and neighbors for hire.

Despite technology’s ability to connect people and communities virtually across the globe, people have become more disconnected, especially in real life, Friar wrote in a blog posted Tuesday.

It inspired the company to think about using technology to enable real-world connections.

“What if Nextdoor could become a place where neighbors can naturally come together to help make their local communities better?” Nextdoor CEO Sarah Friar wrote, adding that the platform connects more than 275,000 neighborhoods worldwide. "Today, relationships sparked on Nextdoor connect millions of people back to the original social network — their neighborhood."

The transaction is expected to bring in approximately $686 million in gross proceeds, including a $270 million fully committed private investment in public equity (PIPE) with participation from institutional investors including funds and accounts, and pro-forma equity value of approximately $4.3 billion.

Data in an investors report suggests that after two years, about 50% of those who use the platform still use it.

The company has been 2.3 times weekly engagement as more neighbors join. More people on the platform also means increased engagement with ads without the need for members to use other social platforms.

For example, there is a percentage of people who visit Nextdoor at least once monthly, but do not visit other social media platforms during the same timeframe.

The company also announced a nonprofit, Nextdoor Kind Foundation, that will invest in neighborhoods to help them thrive. The foundation will make local grants available to support those who do good in their neighborhoods.