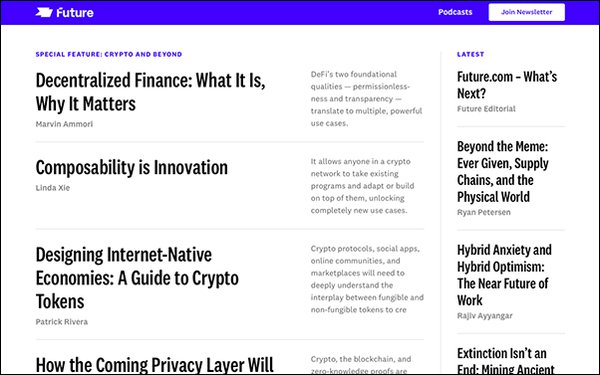 Silicon Valley Venture capital firm Andreessen Horowitz has launched a site called Future in an apparent effort to control narrative about the company and the technology industry at large.

This is part of a trend in which tech firms are publishing “rah-rah stories that they hope will compete directly with news coverage of technology,” NPR reports.

On the surface, it is not clear how this differs from traditional B2B content marketing. Most companies publish positive stories about themselves and their industries, and have been doing so since the days of printed “house organs.”

What may make this different is that Andreessen Horowitz co-founder-general partner Marc Andreessen “loves blocking journalists, along with critics of the tech industry and anyone else who might be seen as an antagonist,” NPR alleges.

Independent tech journalist Eric Newcomer argues: “You're celebrating cutting out the media, then you're giving powerful people aircover to thumb their nose at impertinent questions that you, too, would probably like the answer to," according to NPR.

Future will never be mistaken for The New York Times or Wall Street Journal — on the graphic level alone. The site, which has no images on its home page, offers such features as “Decentralized Finance: What It Is, Why IT Matters,” on crypto.

The site “consists mostly of techno-optimistic articles written by people who have a financial stake in the ideas they are pitching, many from companies backed by Andreessen Horowitz,” per NPR. And it asks: “Is Future journalism or marketing?”

But the new site, which also offers a newsletter and podcasts, asserts it is a valuable information source.

“Hello, world… welcome to Future, a place to make sense of, well, the future as technology changes the way we work, live, and play,” the opening editorial states.

“We just launched with a big ‘drop’ — our very first, June edition of Future — of 30+ pieces, and our next monthly drop is coming in July.”