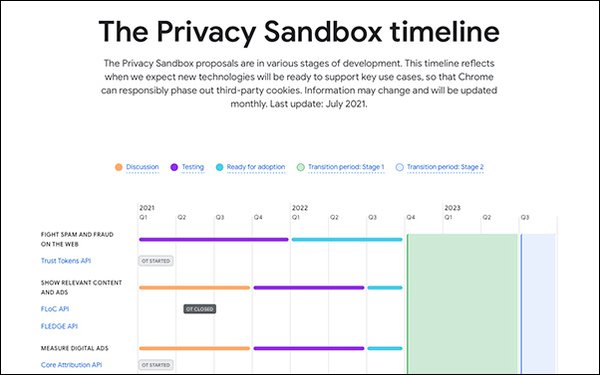 Google has released the detailed timeline for its Privacy Sandbox, including the timing of the company’s rollout of federated learning of cohorts (FLoC) and Fledge.

“We’ve just published more detailed Privacy Sandbox milestones on the path to responsibility phasing out third-party cookies in Chrome!” the tweet reads. “We will update this monthly with testing plans and more.”

In April, Google said that in the coming weeks it would detail FLoC through a series of technical explanations, elaborating on targeting, APIs, remarketing, reach and frequency as well as metrics, measurement and reconciliation.

Then in June, Google announced that it would delay the rollout until 2023, giving companies more time to prepare.

"We expect that in the near future Google Chrome will be presenting a new, more privacy-preserving iteration of FLoC," Lukasz Wlodarczyk, RTB House director of global inventory, wrote in a blog outlining some of the company's predictions early last week. "This new version is expected to address both private and public feedback that Google received from multiple sources, such as an extensive Privacy analysis of FLoC from Mozilla."

The new schedule seems to fit that timeline:

Marketers and developers should expect DNS-over-HTTPS during the second half of this year. The internet standard track document explains the protocol for sending DNS queries and getting DNS responses over HTTPS. Each DNS query-response pair is mapped into an HTTP exchange.

During the second half of 2022, marketers and developers can expect WebID API, user-agent reduction, gnatcatcher, and origin-bound cookies. These, along with the 2023 privacy budget, are explained here.