Are Local Advertisers Growing Too Reliant On Digital? Agencies Think So 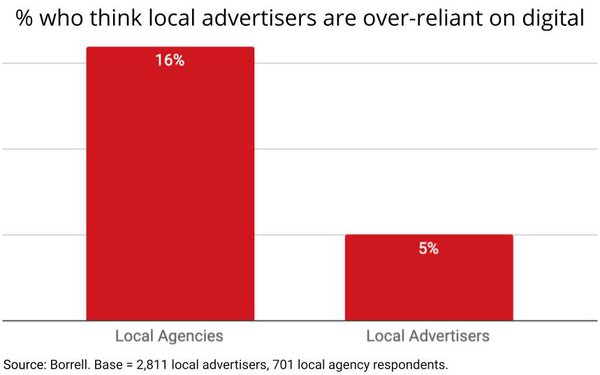 Digital media channels -- especially social and search -- have emerged as the most popular elements of the media mix among local advertisers, but local ad agencies think they are relying on it too much relative to traditional analog media. That’s one of the striking findings of two separate surveys of local advertisers and local ad agencies fielded by industry researcher Borrell.

While only 5% of local advertisers believe they have become “over-reliant” on digital media, three times as many (16%) of local agency respondents believe their clients have.

While the findings are based on self-reported responses, and not empirical media-buying data, per se, Borrell CEO Gordon Borrell says it likely reflects the fact that agency executives believe local advertisers simply are not sophisticated enough when it comes to utilizing media.

That observation is supported by another disconnect between the two studies. While local advertisers who buy their media directly tend to buy just one or two social media platforms -- typically Facebook and/or Instagram -- local agencies tend to diversify spending across more options, especially YouTube and TikTok.

Borrell says agencies buy YouTube at twice the rate of local advertisers, while they buy TikTok at four times the rate.

Borrell says the relative lack of sophistication among local advertisers is supported by the research firm’s own analysis, noting that some are confused about the differences between “using” social media and “buying” social media.

“More and more are telling us they ‘use’ various types of media, but when we change the word to what they ‘buy,’ the percentages are lower,” Borrell explains, noting:  “For instance, we found that 87% use social media, but 57% buy it, and 43% use streaming video, but 14% buy it.”

The sophistication of local advertisers may be improving, however, because Borrell also found that “internal marketing teams are replacing ‘the owner” as the marketing decision-maker.

“These teams are typically composed of junior marketing people (or a secretary, sales rep, or others who seem to be interested in marketing) who are charged with managing the company's website, email list, Facebook or Twitter page, etc.  They are growing in influence and have a strong need to marry up with a local marketing expert to help them.”