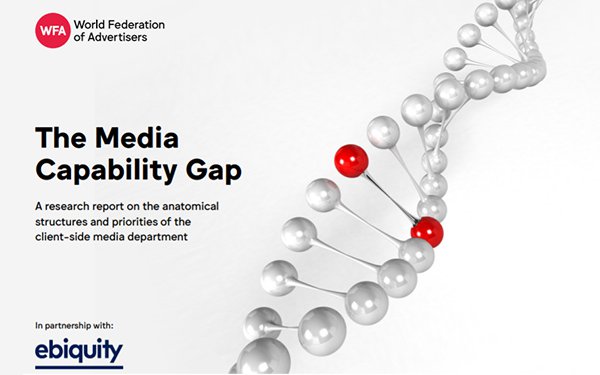 The World Federation of Advertisers (WFA) is out with a new report (developed in collaboration with Ebiquity) that finds that multinational marketers have major media “capability gaps.”

According to the study, there are five key areas where many big marketers are struggling within their media practices. The areas include ecommerce/shopping, finding the right balance for in-housing and partners, and managing the challenges of environmental, social and governance agendas (ES&G), as well as challenges in measurement and transparency.

The report, called “The Capability Gap,” polled 52 global media leaders, representing advertisers with a total ad spend of more than $40 billion globally. More than 80% of the respondents have global responsibility for media. Most of the others have responsibility across multiple markets in Europe.

The study found that the role of media leadership is expanding. New responsibilities are being included within the remit, with a growing focus on brand safety but also the ethical dimension of media investment -- i.e., considering whether media plans are the right choices for the environment, consumers and society at large.

As such, media is being viewed more increasingly as an engine for top-line growth and 81% of respondents believe that media will occupy greater strategic importance at their companies than in the past. In line with that, 75% of respondents predict that media management will have more decision-making authority than previously.

The biggest “gap” was found in the area of ecommerce and shoppable media. No respondent reported being “very satisfied” with their current capabilities in ecommerce, and many are looking for inspiration from sources as diverse as online retailers from Amazon to Alibaba, as well as D2C brands.

Some of this dissatisfaction likely stems from the fact that only 28% of media and marketing teams oversee company budgets for shoppable media formats.

As to media measurement, attribution, and market-mix modeling, 94% of respondents said they believe this area will be important over the coming years. The current problem is not new: The age-old question of “what works” has not been answered by the advances in digital technology and the degradation of third-party cookies only enhances the challenge, per the study.

On the issue of transparency over 90% of respondents said that media transparency will be important over the next three to four years, but only 43% are satisfied with their organization’s current capabilities.

As to in-housing, 67% of those polled said their companies were strengthening internal media capabilities. But only 11% are “very satisfied” with their current capabilities with data and technology being major shortfalls.

According to the study, aligning effective media strategies with ES&G efforts is challenging because of the need to consider the increasingly complex supply chain.

The study is available to WFA members only.