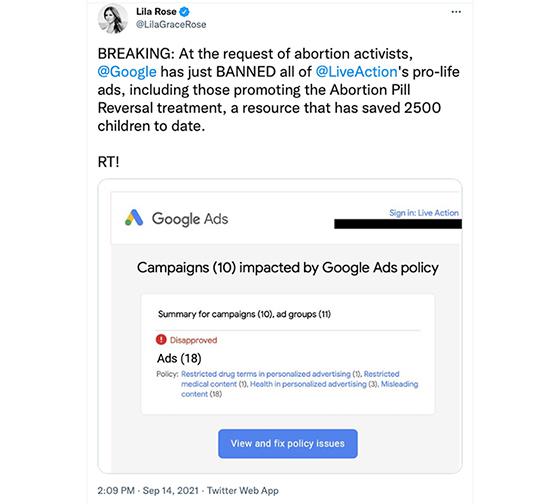 Reportedly, there is a “lack of medical evidence demonstrating the safety and efficacy" of the abortion reversal treatment, which the New England Journal of Medicine refers to as an "experimental" and "unproven" treatment that can lead to hemorrhaging.

In a letter to Pichai, several senators from Texas, Mississippi, Utah, Oklahoma and Florida, and others wrote: “We are deeply concerned by Google’s decision to ban Live Action’s pro-life ads promoting Heartbeat International’s Abortion Pill Reversal (APR) hotline. Google’s pro-life censorship is out of step with the science and reflects an unacceptable bias against pro-life views. We insist that you immediately reverse this decision.”

The senators also wrote that while it is banning ads for "abortion reversal" pills, Google continues to allow ads for purveyors of the "abortion pill" mifepristone by mail -- although, according to the letter, complications and fatalities have occurred after use of the drug.

A clinical study of the "abortion pill" mifepristone and follow-up treatment misoprostol found the risk and mortality rate to be very low.

Google on Wednesday also banned advertising from Live Action, a pro-life organization, and prohibited the group from promoting its new video featuring a lifelike reproduction of how an unborn baby develops in the womb.

Live Action Founder and President Lila Rose shared a screenshot on Twitter of Google’s message telling the group that its ads are no longer permitted, citing “unreliable claims.”

The "abortion reversal" pill was among the advertisements blocked. Rose wrote on Twitter that “Google is permitting abortion facilities to advertise next-day abortions & abortion via mail. This is a blatant, political double standard: Google is ok with ads promoting life-ending drugs, but not life-saving treatments.”