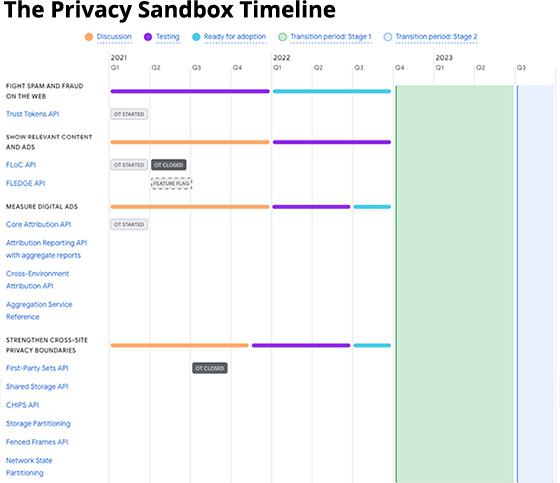 Google’s monthly timeline update for Privacy Sandbox shows the company will delay FLoC testing to Q1 2022, from Q4 2021, as announced in July.

Testing of FLEDGE -- the company’s remarketing solution designed to eliminate third-parties tracking of user behavior, along with the measurement of digital ads -- is delayed until Q1 2022.

As Google moves the industry toward the phasing out of third-party cookies, it needs to introduce APIs enabling options that depend on them, but without enabling cross-site tracking.

The ability to show relevant content and ads will extend through Q4 2021, as Google works on changes. The expectation, Google says, is that FLoC and FLEDGE will become available for wider testing by sometime in Q1 2022.

Though likely directly related, Google’s notice comes shortly after a detailed blog post from Criteo, whose data scientists have been running tests, point out major flaws in FLoC.

Antoine Rouzaud, data scientist at Criteo, detailed in late September a test on how well FLoC cohorts served the marketers’ needs for matching ads to people and optimizing return on ad spend. There have been several updates on other processes, too.

“If the Adtech industry is to use FLoC to build audiences to target, it becomes essential for marketers to understand what’s behind the opaque cohort ID assigned to each group of users,” he wrote. “We showcased one method to so, that proved successful for some of the biggest cohorts. However, the low volume was once again a blocker to validate that it worked for a majority of cohorts.”

He went on to explain that the granularity calls into question the utility of this approach for real world needs, and that the performances generated by these interest-based audiences compared with third-party cookies remain “highly debatable.”

Here are key points made by Rouzaud: