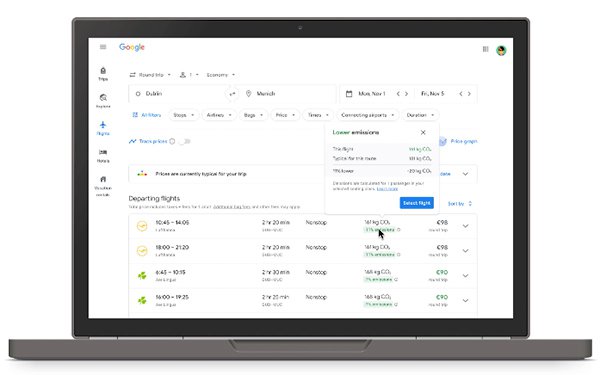 On Wednesday the company announced new services focused on reducing planet-heating greenhouse gas emissions, which are primarily found on Search, Maps, Travel, and Nest. And to keep people updated on their investments, Google will show people an aggregate climate score on their own portfolio in Google finance.

People come to Google daily searching for general information on climate change. They ask questions such as the cause, and how it affects the local community. When people search on climate change or related terms later this month, they will see a new layout in search showing relevant information on the topic, such as the effects from transportation and using appliances.

Search interest for “eco hotel” has doubled in the past year on Google, which is one reason that Google will make it possible for people to see the environmental impact of their travel choices across its platforms.

Google will bring information on carbon emissions into Google Flights.

When travelers search for flights on Google, they will see the associated CO2 emissions for each flight in search results. The numbers are put into context by labeling flights that have significantly higher emissions, which in turn could prompt the airline industry to make changes. Google will add a green badge to flights with significantly lower emissions.

The CO2 emissions are not just flight-specific. They are seat-specific. Emissions increase for business of first-class seats because they take up more space.

Search results for a hotel will now show when the company has made meaningful commitments to sustainable practices through badges and lists that might include waste reduction, energy efficiency, and water conservation. Hilton and Accor already have added this information.

Beginning today, U.S. drivers will see Google Maps default to the route that uses less fuel when the estimated time of arrival is similar.

This feature will become available in Europe next year. Fuel efficiency reduces gas costs and pollution. If the fuel-efficient route is slower, the app will show users their options, so the user can make an educated decision on the one to choose.

A passenger vehicle emits about 4.6 metric tons of carbon dioxide per year, based on fuel consumption and driving conditions.

The company also is working on a project to optimize the efficiencies of traffic lights in cities. Inefficient traffic lights are bad for the environment and public health, according to Google. Idling cars waste fuel and increase street-level pollution.

One of Google’s artificial intelligence research groups has found a way to accurately calculate the traffic conditions and the timing at most city intersections. They are training a model on that data to optimize the inefficient intersections. Pilots are being conducted in Israel. So far, the data shows a 10% to 20% reduction in fuel and intersection delay.

Now when consumers search for a car model, Google will also serve up results for hybrid and electric vehicles, along with any rebate information. When searching for a particular electric vehicle, users will see nearby charging stations that are compatible with the model. Google also will show the financial impact on the purchase.