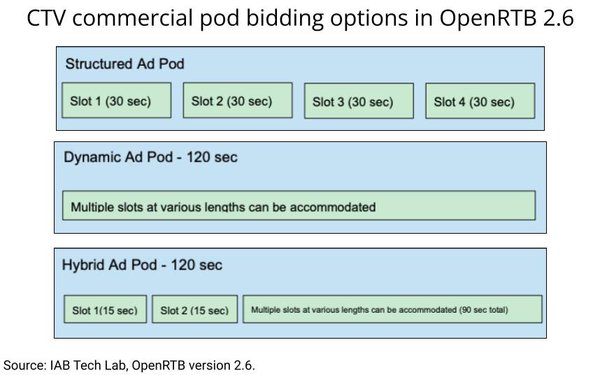 The IAB Tech Lab this morning released a new version of its OpenRTB standards and specification, including features it says will enable the “seamless buying of connected TV (CTV) inventory.”

The specs for version 2.6 which are open for public comment through Feb. 7, 2022, introduce new ways of thinking about and bidding on commercial ad pods in CTV programming in real-time.

The tech lab said the specs cover three types of CTV advertising pods -- “structured, dynamic and hybrid” ones -- that will give advertisers and media-buyers the flexibility to “place multiple ad requests in one bid request.”

Hybrid pods combine features of both structured and dynamic pods.

The lab said the introduction of the new ad pods into CTV bidding will enable it to align with the ways traditional TV advertising is bought and sold, while enabling more flexibility in real-time bidding on programmatic exchanges.

The adoption could also change the way advertisers and media-buyers think about the way they buy ads in linear TV commercial pods, which have never been explicitly biddable or even negotiable. For example, TV networks historically have never sold specific ad positions in a commercial pod, even though some -- usually the first spot, or the last spot in a pod -- are known to have greater viewing due to skipping and fast-forwarding through programming. An IAB Tech Lab spokesperson confirmed that via the new OpenRTB 2.6 standard, advertisers will be able to bid for specific positions within CTV commercial pods.

From a supply-side POV, the lab asserted that the enhanced flexibility would enable CTV operators to “drive higher fill rates within a pod,” meaning more of the inventory will be sold as part of programmatic bids.

“As more and more CTV is bought and sold programmatically, it is critical that the industry is able to use a standard, yet flexible protocol,” IAB Tech Lab Senior Vice President-Product Shailley Singh said in a statement announcing the new specs.