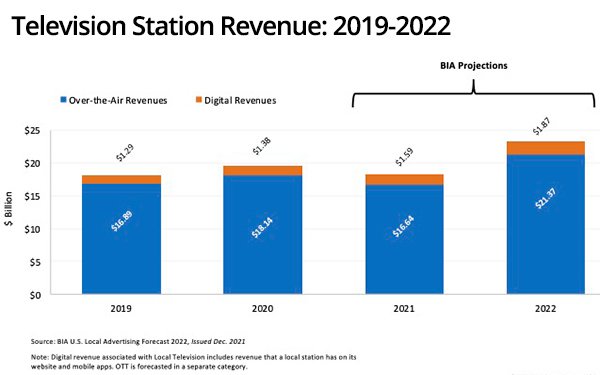 Next year, another expected record for political advertising spending, coupled with the Winter Olympics, will fuel sharp overall growth for local TV ad revenues -- up 28% to $21.37 billion for TV stations, according to estimates from BIA Advisory Services.

Total local media political advertising spending is projected to come in at $8.4 billion.

This year’s local TV ad-spending growth is estimated to end, with a decline versus 2020 --$16.64 billion versus $18.14 billion. This is largely due to comparisons to political advertising in 2020 -- boosted by Presidential campaign ad spending, which amounted to $3.5 billion.

BIA notes that digital revenue associated with local television includes revenue that a local station has on its website and mobile apps. The OTT forecast is in a separate category.