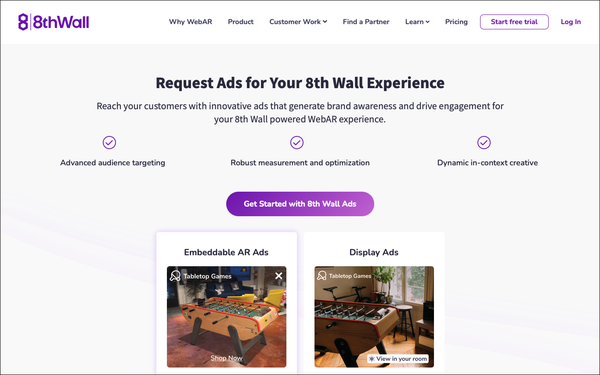 The partnership aims to provide agencies and brands with everything they need to create and distribute branded WebAR campaigns.

Digital advertising is changing. Consumers suffer from ad fatigue. They want new ways to engage with brands. With WebAR, the companies believe the 3.5 billion smartphones can access these experiences — no app required.

8th Wall’s AR experiences work in the browser, do not require an app to download, and offer the ability to reach nearly 3.5 billion iOS and Android smartphones, desktop computers and AR/VR headset devices.

AR makes use of the mobile camera, computer vision and 3D assets to create interactive, personalized and memorable brand experiences.

Last year, an Emodo survey found nearly three-quarters of consumers would be more likely to pay attention to an ad that incorporated AR elements, and about 70% said they would like to see more ads that do so in the future.

The partnership includes the introduction of an embeddable AR ad type that places interactive WebAR content inside ad units directly alongside publisher content, offering a more streamlined and engaging experience for consumers.

The ad transported mobile users to New York City’s Times Square through an AR-powered snow globe experience, allowing them to engage with entertaining content from 17 Broadway musicals and plays. The campaign saw 90% of the audience enter the experience, boosting an average engagement time to 3 minutes. Nearly 25% of users also shared the experience to spread more engagement.

WebAR experiences support performance-marketing campaigns. For example, according to Emodo, one national convenience-store chain saw a return on ad spend (ROAS) that was 3.79-times greater for its WebAR campaign compared to traditional digital media.

Embeddable AR ads today are direct to publisher opportunities only.

Emodo and 8th Wall have partnered for the past year to establish an end-to-end web-based augmented-reality advertising solution.

The 8th Wall WebAR platform launched in late 2018. Since then, the platform has been used to power more than 1,300 commercial WebAR experiences for blue-chip brands across industry verticals. Many of these experiences have been featured on the 8th Wall Discovery Hub.

In 2020, 8th Wall productized its Inline AR capability which enables WebAR experiences to be embedded into existing websites and apps using iFrames.

The combination of 8th Wall's WebAR platform, including its Inline AR capability, with Emodo's network of publishers has unlocked the opportunity for Embeddable AR ads.