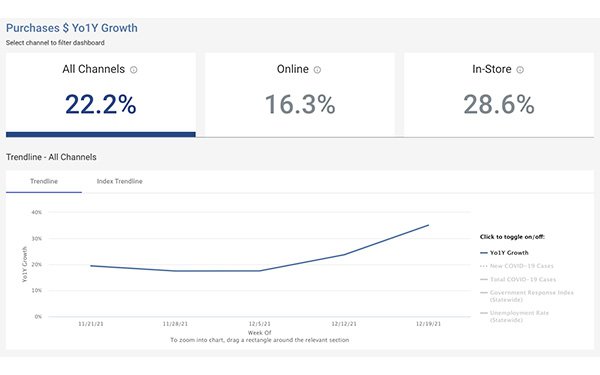 Despite supply-chain slowdowns and record out-of-stock warnings during the 2021 holiday season, U.S. consumer spending on credit and debit cards from the week of Thanksgiving through the week of Christmas for 2021 rose 22%, according to recent data.

“There was a bigger shift to more card use, because people just didn’t want to handle cash or they bought online,” he said. “Some stores stopped accepting cash, and that trend stuck around.”

“Debit spending increased more than credit, during the pandemic overall, not specifically during the holiday period,” he said.

Airline sales during the holiday period rose 150% compared with the prior year. Hotels and motels rose 120%. Retail rose about 10%.

Consumers are on the go. The technology can identify where stores or restaurants gained or lost share during a specific time period. The data also shows losses and gains depending on where consumers live, in addition to the city where the restaurant is located.

People are shopping both online and in stores, Mangiapane said. Consumers spent 54% more in restaurants and bars during the holiday period, compared with the prior year.

“The only categories that didn’t pick up as strong were toys and sporting goods,” he said. “Most people bought items in those categories in 2020. Electronic stores also had slower growth for most of 2021, compared with the prior year. Mail orders from catalog businesses also declined.”