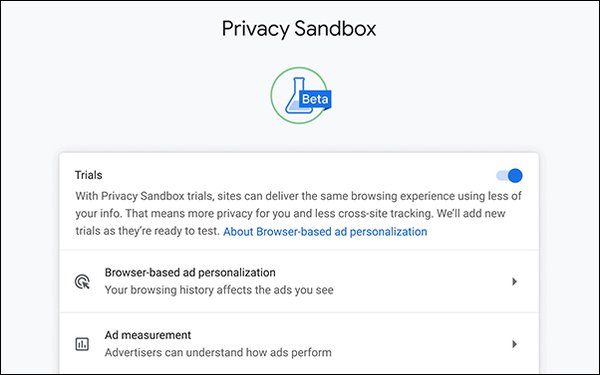 Google has announced the next set of trials for its Privacy Sandbox proposal, aimed at replacing tracking cookie-based targeted advertising in its Chrome browser. This set focuses on ads relevance and measurement. It’s called origin trials.

The Sandbox privacy proposal is made up of multiple features. Topics is an interest-based ad targeting option for browser tracking of user web activity. It replaces Federated Learning of Cohorts (FLoC). And Fledge, Google’s proposal for remarketing and custom audiences without individual-level user tracking.

“We recognize that developers will need some time to use the APIs, validate the data flows, and measure performance,” Vinay Goel, product director for Privacy Sandbox, Chrome at Google, wrote in a post.

The idea is for companies to provide feedback as they move through the different testing phases, which, in theory, will allow Google to improve the APIs. Once the APIs work, Google will make them available in Chrome, allowing more developers to integrate, evaluate and provide feedback.

He wrote that Chrome also plans to test updated Privacy Sandbox settings and controls that allow users to see and manage the interests associated with them, or turn off the trials entirely.

One of the most important pieces of this trial for marketers points to attribution reporting that measures and reports on the performance throughout the ad lifecycle.

As part of attribution, Google will process reports and process them through an aggregation service. Unlike third-party cookies, these reports do not allow technology companies, buyers, or publishers to view the data behind a user's browsing behavior across multiple sites, but Google says it is possible to measure ad conversions based on interest.

Facebook has not had an easy time of targeting ads based on interest. Facebook’s Interest Category targeting may be up to 33% inaccurate, according to researchers at North Carolina State University who conducted two separate controlled experiments.

Chrome will also begin testing updated Privacy Sandbox settings and controls that allow users to see and manage the interests associated with them, or turn off the trials entirely, writes Goel in a post that provides a sample of some of the trials.

In other words, users will have an option to report topics. A graph in the post shows a menu with a toggle usd to turn off or on the trials, and the ability to personalize where the user could remove interests assigned to them by Topics-based targeting in their browsing activity.