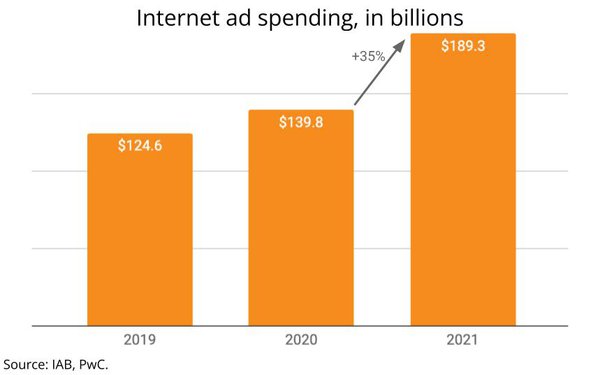 Digital ad revenue in the U.S. rose 35% to $189 billion last year as marketers spent more to reach consumers, according to a report from the Interactive Advertising Bureau (IAB) and PricewaterhouseCoopers (PwC) released Tuesday.

David Cohen, CEO at IAB, believes that an increase in consumer use of online services and growth of small and mid-sized businesses during the pandemic fueled the increase in digital spending — specifically in digital audio and video.

“We expect this digital migration to drive the continued growth of a healthy and competitive digital marketplace driven by innovation and entrepreneurship,” he stated.

A Harvard Business School study commissioned by the IAB notes that the internet economy has grown seven times faster than the U.S. economy during the past four years, and now accounts for 12% of the U.S. gross domestic product (GDP).

While search revenue grew substantially — 32.8% in 2021 — it did not grow as strongly as other areas, leading to a slight decrease in total revenue share, down 0.8 percentage points.

Search maintains the largest share — at 41.4% — but digital video saw the most growth in revenue.

Digital video continues to be one of the fastest-growing channels — up 50.8% compared with last year, when total revenue hit $39.5 billion.

The growth seen in 2021 demonstrates that the future is in streaming, which experienced 50.8% year-over-year (YoY) revenue growth in digital video — inclusive of connected television and over-the-top.

This represents the second-highest YoY growth rate by ad format in 2021, behind only digital audio. Revenue totaled $39.5 billion, and digital video’s share of digital revenue grew to 20.9% — up 2.2 percentage points from 2020.

The growth of video was consistent across devices, as digital video revenue grew 58.2% on desktop and 47.8% on mobile.

Social media advertising was up 39.3% to $57.7 billion, as consumers continue to engage with Meta platforms, Snapchat, TikTok, and Twitter.

The increase of mobile video and gaming, as well as the continued adoption of mobile ecommerce, were key contributors to the growth of increased revenue streams.