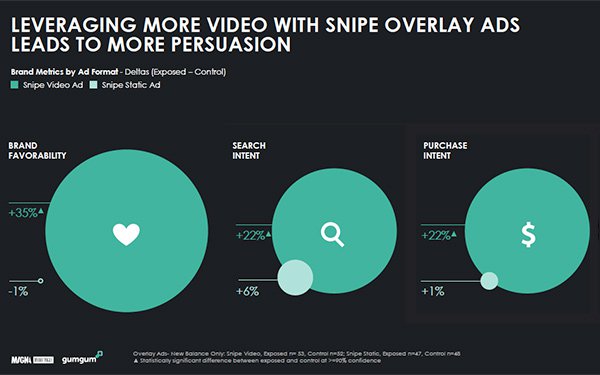 Data in the study, Breaking Through: Moving Beyond the Commercial Break on CTV, analyzes how brands can stand out on connected TV (CTV). It suggests brands should consider adding overlay ads, which appear in the video content rather than the typical ad experience where the ad is placed during a break in content when advertising on CTV.

The companies believe this method captures the attention of consumers with fewer commercials.

In the study, which was fielded online, 807 participants randomized in exposed and controlled groups set out to test overlay ads on CTV to see how they stack up to traditional video ads, since overlay ads offer more inventory, do not disrupt playback and can be delivered in a contextually relevant environment.

The study found that overlay ads are four times more memorable than video ads and drive 72% more savings for advertisers.

The study methodology included recruiting CTV viewers to watch a streaming TV show of their choice, followed by a final survey to measure the impact on traditional branding metrics and obtain feedback on ad frequency.

Snipe refers to automated on-screen messages that are most commonly used to promote upcoming programs on a TV channel.

Among those who recalled the brand and were in the market for the advertised product, more than 41% found the ad interesting and more than 41% felt the ad was context-appropriate.

Ad-frequency fatigue continues to creep into CTV, with 65% of people said they believe seeing an increase in the number of ads shown per show.

Higher frequency of CTV ads is especially apparent to younger generations, with 71% of those in between the ages of 18 and 24 saying they feel that ad frequency on CTV isn’t going declining or away soon.

CTV is not immune to ad attention challenges. About 70% of those between the ages of 18 and 54 report almost always avoiding video ads on the medium.

The findings from the study suggest overlay ads make people feel less bombarded by ads and drives better brand perception. The data shows overlay ads lead to more than a 5% increase in brand favorability, more than 4% increase in purchase intent and more than 8% feel the brand is thoughtful.