National TV Scatter Spending Down 32% Vs. 4 Years Ago 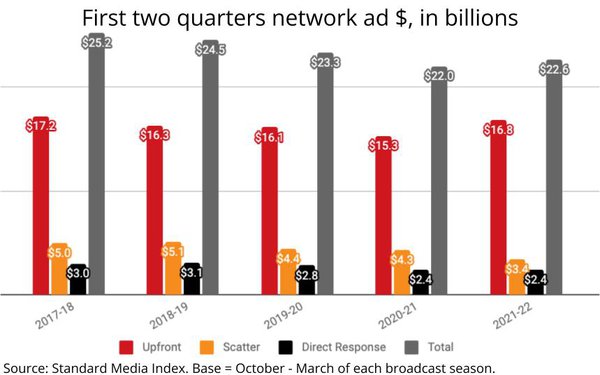 National TV scatter market advertising revenue is down a massive 32% so far this season -- October 2021 through March 2022 -- versus the same period four years ago, according to an analysis conducted by media competitive ad tracking researcher Standard Media Index.

This year -- similar to 2018 -- includes Winter Olympics programming on NBC TV networks. And the period, like this year, starts off a big political advertising season with spending ramping up for the November elections.

SMI also notes that all direct-response advertising across all programming for that same period is also down a sizable 21% to $2.4 billion.

Supply-chain, inflation, and a possible weaker economy are reasons that TV buying and selling executives point to for the major slowdown in national TV advertising.

The first- and second-quarter scatter market TV ad-selling periods are typically indicators of how the upfront TV advertising marketplace -- which starts in a few weeks -- will fare.

At the same time, the advertising research company says, upfront TV ad spending-- which is placed before the start of the TV season in the fall -- is mostly flat versus four years ago -- at $16.8 billion, down 2% from the 2017-2018 TV season, which came in at $17.2 billion.

National TV scatter spending for just the most recent January-March 2022 period versus the same period in 2021 does not look much better.

TV scatter advertising spending for the first three months of 2022 totaled $1.556 billion -- virtually flat versus the same period a year before ($1.559 billion). But the January-March 2021 period came amid a still disruptive pandemic -- a weak ad spending period, one where vaccines were just getting administered in the U.S.

The previous year period -- January-March 2020 period was almost entirely before the pandemic took hold (starting March 15). Scatter ad spending then was at $1.995 billion.