GroupM Unveils CTV 'Viewability' Initiative, Finds As Much As 10% Of Ads Delivered With TV 'Off' 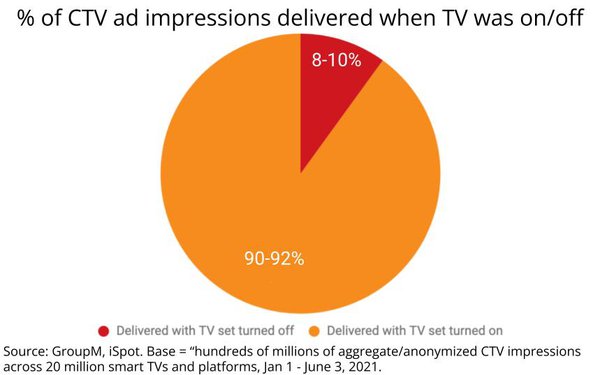 WPP’s GroupM unit this morning said it has partnered with big media companies to create new standards for measuring and verifying the "viewability" of ad on streaming and CTV (connected TV) environments.

The announcement says GroupM and the media companies are working with "standards-setting bodies to create a streamlined measurement framework and set of best practices to ensure ads are only counted when delivered to screens that are on, with people in front of them,” but oddly does not include any explicit reference to the Media Rating Council (MRC), which has served as the ad industry’s self-regulatory body for setting standards and auditing and accrediting measurement services that meet them since the 1960s, following Congressional hearing and a consent decree with the U.S. Department of Justice.

Odder still, the announcement comes one weekday after the MRC held a webinar explaining its standards-setting process for audience measurement, how it works and why it is integral to the audits and accreditation processes it oversees for the U.S. ad industry.

The only trade body explicitly cited in the announcement is the Interactive Advertising Bureau (IAB), which normally works closely with the MRC on setting industry audience-measurement standards.

"IAB and IAB Tech Lab have been at the forefront of the unique challenges of the CTV space across publishers, platforms, apps and OEMs," IAB CEO David Cohen said in a statement, included in GroupM’s announcement, adding that the Tech Lab plans to release an “open measurement” SDK (software development kit) for CTV in the third quarter of this year, which will “enable the industry to facilitate third-party viewability and verification measurement.

“It will also deliver a 'set off' signal and algorithmic assessment around the likelihood that a person is  in the room viewing. We commend GroupM and others who look to quantify industry opportunities such as this one and look forward to continued education, best practice sharing, and technical standards to address these areas. Our Video Leadership Summit happening  in just a few short weeks will tackle these issues head-on."

GroupM said the initiative follows a joint study it conducted with audience-measurement firm iSpot that "quantifies inflated CTV ad delivery counts and reveals that, on average, 8-10% of streaming impressions play when the TV is shut off, primarily through ancillary devices."

"Depending on the configuration among the three components -- TV make and model, streaming device and publisher app -- the CTV impression overcount by publisher ranged 2.5% to 15% across all CTV streaming activity," the study found.

iSpot has been among the audience-measurement firms vying as "alternate currencies" to Nielsen for the TV and so-called "cross-platform" ratings in this year's upfront advertising marketplace.

iSpot, which has even been independently "certified" as ad market currency by at least one big media company -- NBCUniversal -- currently is the only Nielsen alternative that has any MRC accreditation, though that is only for TV occurrence data, not for actual audience measurement.

But at least in terms of this viewability standards-setting initiative, the MRC will be taking a backseat.

"Our initial work was to quantify the problem and addressing standards setting is a key next step for us," a GroupM spokesperson tells MediaPost, adding, "We are engaged with the IAB, and working in partnership with the MRC and others to build more transparency and counting rigor into our increasingly complicated media marketplace."