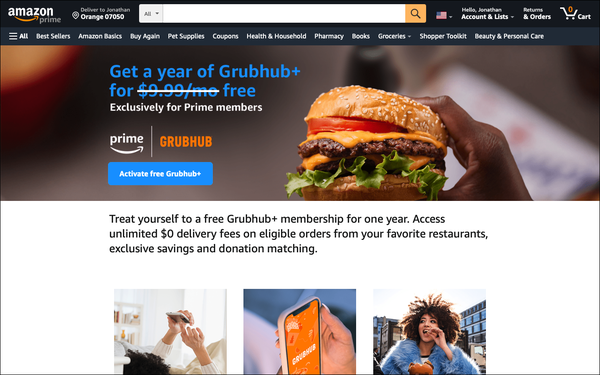 Prime members in the United States can now get a free one-year Grubhub+ membership that is typically $9.99 per month, Amazon announced Wednesday.

The deal could bring in business for local restaurants and advertising dollars for Amazon, as the marketplace begins to build out its local ad business. The offer includes unlimited zero food delivery fees on orders over $12 and "exclusive perks for Grubhub+ members and rewards like free food and order discounts."

It also could generate additional revenue and help Amazon close the loop to target consumers with local ads.

In June, Amazon reportedly began to focus more on local ads in an effort to compete with Google and its “near me” approach.

At the time, media reports identified Amazon Job postings for positions in cities like New York, Chicago, and Washington, D.C. describing the company’s move to form a new Local Ads team that would build relationships with local media companies and agencies.

The perks for Amazon members extend across more than 4,000 cities with hundreds of thousands of restaurants when ordering on Grubhub.

Prime Member diners also can “eat good while doing good” by opting into Grubhub’s Donate the Change program, a donation-matching initiative that raised more than $25 million in 2021 alone, benefiting more than 20 charitable organizations across the country.

Amazon also announced it will include exclusive Prime member content for "The Lord of the Rings: The Rings of Power," and unveiled deals ahead of the "Thursday Night Football" anticipated launch, as well as exclusive experiences for members at the upcoming Ultimate Crown streamers vs. gamers battle featuring MrBeast and Ninja.

Just Eat Takeaway, which acquired Grubhub in the United States in June 2020 for an estimated $7.3 billion, told Bloomberg it expects the real to boost its business.

Amazon will receive stock options for a 2% stake in Grubhub and will have the opportunity to increase the holding to 15%, Just Eat told Bloomberg. Amazon’s stake is in the form of warrants, which will vest depending on how well the partnership performs and how many new customers it attracts.