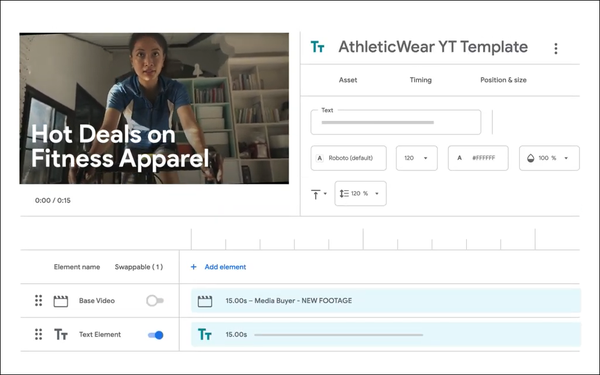 Google released Ads Creative Studio on Thursday after announcing it last year. The platform, which PepsiCo and General Motors South America tested early on, is now globally available with more features to help teams collaborate, and create and customize display and video ads.

The platform enables advertisers to create hundreds of versions of one display or video ad.

Marketers can customize the ads for different audiences, locations, languages, or contexts.

Making changes requirescreators select changes they want and provide the different versions of the particular element based on pre-defined rules.

Advertisers identify the types of elements in the ad creative — such as a product image, superimposed text or sound — wanting to make “swappable” and provide different versions of that element based on a set of rules.

The rules include the intended audiences to reach or contexts that the advertiser wants to match.

The feature is available for video, but will soon launch for display.

A set of features also enables advertisers to share projects made in Ads Creative Studio to all of Google’s media platforms — Google Ads, Display and Video 360 and Campaign Manager 360.

Users can go to Google Ads to easily find those images and use them when assembling creatives for Performance Max campaigns, for example.

The Ads Creative Studio asset library can be viewed as a consolidated home for all creative assets that marketers can then share with multiple media accounts for activation.

One feature allows marketers to connect the Ads Creative Studio account to Campaign Manager 360. Beginning today, it becomes available for everyone to upload, manage, and export HTML5 creatives.

PepsiCo, in early tests, wanted to reach audiences that were planning house parties, BBQs, and sporting events. The creative team at PepsiCo used the platform to customize their ads at the relevant audiences and found most effective the campaigns with creative pieces that showed social gatherings and food pairings. The path to customization was smoother and more efficient. With the one tool, the team standardized processes across functions.

General Motors South America wanted to boost brand awareness of the Cruze 5 model. The brand customizes the campaign beyond the basics and needed to produce 14 unique ads without sacrificing time, budget or resources. Using Ads Creative Studio, the brand reduced costs by 30% and the campaign saw a 56% increase in Google searches for “chevrolet cruze” and a reduction in cost per view of 32% compared to the industry benchmark.