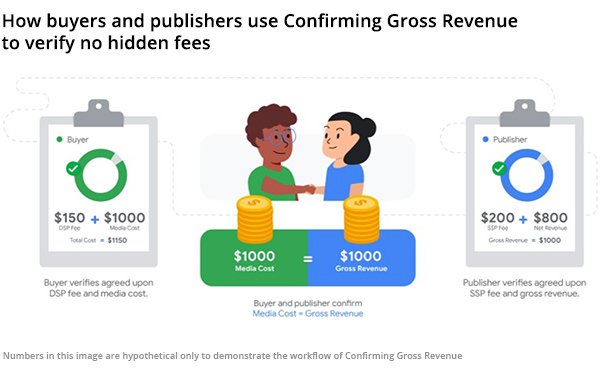 Google on Wednesday announced a program to help advertisers and publishers verify that no hidden fees were taken from each digital advertising transaction in Ads Manager.

The technology tracks where the money goes and helps marketers understand where it is spent, building on years of work to increase transparency to programmatic advertising.

The feature, Confirming Gross Revenue, aims to bring more transparency to media costs and to strengthen marketer confidence in digital advertising for advertisers and publishers, according to Allan Thygesen, president of Americas & Global Partners at Google.

“On average, 15% of advertiser spend is unattributable, according to some industry estimates,” Thygesen wrote in a blog. “One of my biggest concerns about this trend is its impact on marketer confidence in digital advertising.”

The Revenue Verification Report allows advertisers to see the total gross revenue received from a specific publisher. The advertiser and media publisher can then verify that the media cost from the buyers’ report matches the gross revenue the publisher received. If the numbers match, the buyer can assume that their full media spend reached the publisher without taking any hidden fees.

Google will run early tests through Display & Video 360, but company planners are in communication with other demand-side platforms, sell-side platforms, publishers and agencies to test the feature and provide feedback to improve it.

In the process of developing this tool, Google took steps to simplify the platforms and explain its fee structure to advertisers and publishers. The company also participated in industry transparency standards across its buy-side and sell-side businesses, such as ads.txt / app-ads.txt, sellers.json and SupplyChain Object.

“We recently brought SupplyChain Object data into Ads Data Hub to help marketers using Display & Video 360 see the steps their impressions took before arriving on a publisher’s site,” Thygesen wrote in a post.

Although progress has been made, Thygesen said the company realizes there is more work to do. Confirming Gross Revenue is one part of Google’s efforts to address concerns about lack of transparency that we have heard from publishers, agencies, advertisers and regulators.

During the next few months, Google will continue to work with the industry to build out this new solution, as well as initiatives to instill more confidence in online advertising.