Morgan Stanley, Tennis Pro Leylah Fernandez Inspire Through 'See It To Be It' 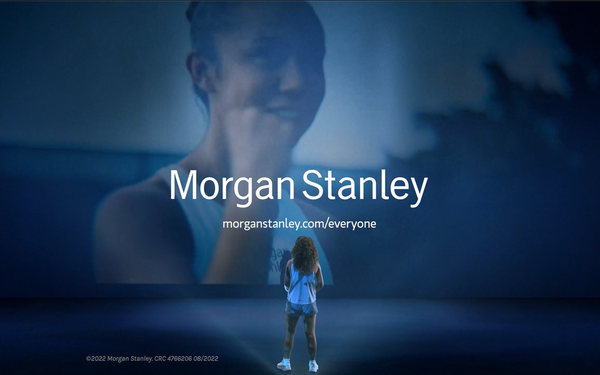 Morgan Stanley debuted the TV spot -- See It To Be It -- featuring brand ambassador and professional tennis player Leylah Fernandez. The 19-year-old tennis star of Ecuadorian and Filipino descent highlights the impact of seeing people "like you" succeed.

Fernandez, in the spot released Friday, encourages a young girl and helps her to believe that she can succeed -- and one day, be that inspiration for someone else.

See it to be it, says Fernandez. “When you see someone who you think can succeed, you believe it too,” she says in the video. “So, see me. Then see what you can do.”

The Marketing Arm created the inspirational spot for Morgan Stanley -- Fernandez’s first since being announced as the company’s brand ambassador in March.

The spot will air on ESPN starting Monday, as well as across Fernandez’s and Morgan Stanley’s social channels including Instagram, Facebook and LinkedIn.

The campaign underscores Morgan Stanley’s commitment to diversity and inclusion and follows similar work under its Everyone Deserves a Shot platform that that launched earlier this year during the PLAYERS Championship in partnership with additional brand ambassadors Justin Rose and Cheyenne Woods.

The spot demonstrates Morgan Stanley’s commitment to support the next generation of leaders and ensure it reflects the diversity of the world they inherit. This can happen by empowering youth to develop life skills through sports, training in financial literacy or providing scholarships to leading institutions of higher learning.

The message in the TV commercial builds on the idea of showcasing the value to help open doors for a new generation.

Morgan Stanley and Fernandez will share hints about locations for the drops across their social channels — @morgan.stanley and @leylahannietennis on Instagram — so fans can search and find the packages filled with gifts.