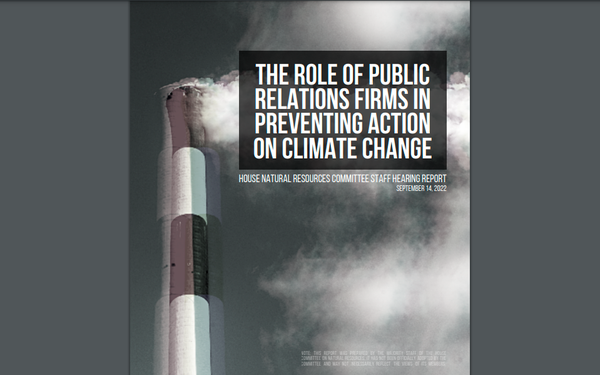 Award-winning campaigns by big ad agencies and PR firms, including IPG’s UM unit, made it into the Congressional record this week -- but not necessarily for reasons they would have asked for.

The campaigns were cited as examples of work done to “greenwash” the oil industry in a report compiled by the House Natural Resources Committee Staff in preparation for oversight committee hearings his week on the role that agencies play in preventing action on climate change.

The citations -- which were lifted directly for the agency and PR firms industry awards submissions -- show how they utilized strategies and tactics to represent fossil-fuel clients as doing more for clean energy than their actual records would show, or as an expert witness during one of the hearings this week put it (see related story in today’s edition), “over-indexing” the public reputations of fossil fuel companies, especially Big Oil.

In the case of UM, the client was the “Unexpected Energy” campaign executed for client ExxonMobil, and the tactics used was mainly a native advertising campaign produced The New York Times brand content studio and published in the paper in a way that might not be distinguishable from average readers as being paid content.

“One example of this is Universal McCann’s (UM) 12-week campaign for ExxonMobil in The New York Times, launching content across all NYT platforms simultaneously,” the report reads. “The campaign objectives were to ‘drive awareness of ExxonMobil’s commitment to the research and development of lower-emissions energy through next-gen biofuels,’ ‘develop positive brand perception of ExxonMobil through their efforts as a forward thinking and responsible company,” and “increase favorability of primary audiences’.”

The report documents how UM worked with the Times’ “T Brand marketing group” to create native content in a “Timesian voice” that “would feel ‘native to the publication,’ and which mirrored the award-winning journalist of the world renowned publication [to ensure] authenticity, credibility and relevance.”

“This ensured the target audiences would be reached with the same messaging across multiple platforms in an array of creative formats.”

On the downside, UM’s citation in the Congressional report may prove embarrassing, coming at a time when it and other big agencies are pushing a sustainability agenda, including more sophisticated ways to make carbon-neutral or carbon reducing ad buys, as well as adopting practices within their own organizations to combat climate change.

On the upside, the report demonstrates incredible ROI (return on investment) for the campaign UM executed for ExxonMobil, which delivered on its objectives of delivering a “10% lift in brand favorability” for ExxonMobile for a mere $5 million media buy.

The report, which can be downloaded here, provides other documentation of awards-submissions by agencies and PR firms working to lift the “green” brand perceptions of fossil fuel marketers beyond what their actual actions might otherwise merit.

The report, which was published in September in advance of this week’s hearings, did not address some of the most egregious examples of agency work for the fossil fuel industry, including some less-than-transparent “opposition” campaigns utilizing “third parties,” including fake "grassroots" organizations and social media followers to offset or directly disrupt efforts by climate action advocacy groups.

During one of the hearings on Wednesday, several representatives referenced one notable example, public affairs agency FTI Consulting, which has so far defied a Congressional subpoena to submit information and testify to Congress.

“For all we have seen here today, I know there is more. And it’s worse,” subcommittee chair Katie Porter said at the conclusion of the hearing on  “The Role of Public Relations Firms in Preventing Action on Climate Change.”

“We initiated the subpoena process for FTI Consulting, which has one of the worst reputations in the business,” she continued. “The negotiations are ongoing. The trajectory is, sadly, not good. What are they trying to hide?

“Is it their creation of fake grassroots groups for their clients to hide behind? Was it the creation of fake social media profiles to track the plans of activist groups? Or is there something worse?” 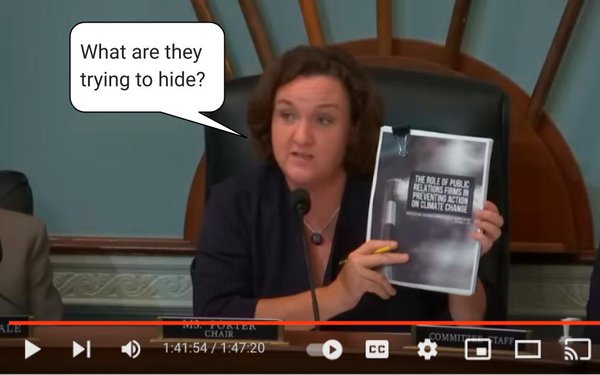