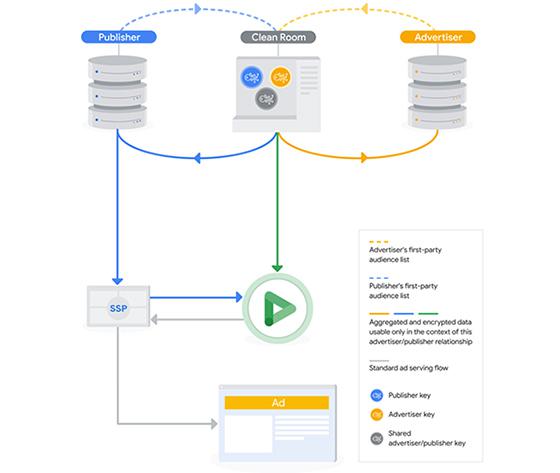 Google on Tuesday announced a solution in Display & Video 360 that provides advertisers and publishers with a secure and private way to reconcile first-party data for marketing use across audiences.

Publisher Advertiser Identity Reconciliation (PAIR), a protocol for cleanrooms that lets brands and publishers with their own customer email lists match against each other’s audiences.

The goal is to help brands reach known customers, such as loyal repeat shoppers, who visit a publisher’s site. It connects first-party data  between advertisers and publishers. The brands take their first-party data, in the form of customer email addresses, and encrypt the data, and match it against a publisher’s encrypted readers that can be stored in the form of email addresses.

Other forms of first-party data, such as phone numbers, may be used as the identity match key in the future, but today the initial proof of concept only included emails.

PAIR also aims to protect advertisers and publishers from data leaks by encrypting the first-party data three times with three different keys: an advertiser key, a publisher key and a key shared between the two parties.

PAIR will match a brand’s first-party data against a publisher’s data, not Google’s data and it can be used with any supply-side platform (SSP), according to the company.

Encryption is based on keys. The keys are unique for every advertiser-publisher relationship, and ensure there is no way for any one party to reverse-encrypt or identify users.

After encryption and reconciliation, the advertiser and the publisher receive the percentage match rate of their respective first-party audience lists, but no user-level matches or Personally Identifiable Information (PII) will be sent back. No PII will be shared with either the supply side platform or with Display & Video 360, Dan Taylor, vice president of Global Ads at Google.

Google is allowing customers to pick inventory and partners.