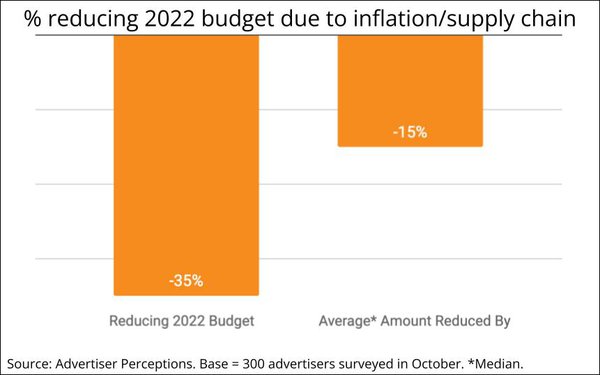 In another sign of the toll that macroeconomic disruption has been taking on the ad economy, more than a third of advertisers (35%) say they have reduced their 2022 advertising budgets due to increasing inflation and/or disruptions in their supply chain.

While most of the executives who have cut their ad budgets said they have reduced them by less than 20%, the median was 15% among all of them.

The findings are part of a just-published report -- "Macroeconomic Effects and Perceptions Study -- from Advertiser Perceptions and are based on interviews conducted in October with 300 advertisers directly responsible for media-buying decisions.

The good news is the percentage saying they have reduced their 2022 ad budgets due to the economic factors is down from 40% who said so in a similar survey conducted by Advertiser Perceptions in July and August.

Despite having had a material negative impact on 2022 advertising budgets, a majority (60%) of those who have cut their ad spending said they plan to reinstate "some or all" of it during the holiday marketing season.

The report also underscores a range of impacts and responses to macroeconomic volatility, with some marketers indicating they actually benefited from the effects of inflation (ie. better margins), although supply-chain constraints appear to have been an overall negative in terms of marketing budgets and ad spending.

In addition, many of those whose ad spending was constrained responded by adjusting their ad budgets to "high-performing media" options, or reduced the expectations of their KPIs (key performance indicators).

Not surprisingly, those adjustments have led to something that's already been reflected in the third-quarter earnings calls of major digital and TV-centric media companies: a reduction of linear TV ad spending.

"Advertisers have deprioritized bringing linear TV spend back in time for the holidays since the third quarter, but now hope to restart video and out-of-home spend this quarter," the report notes.