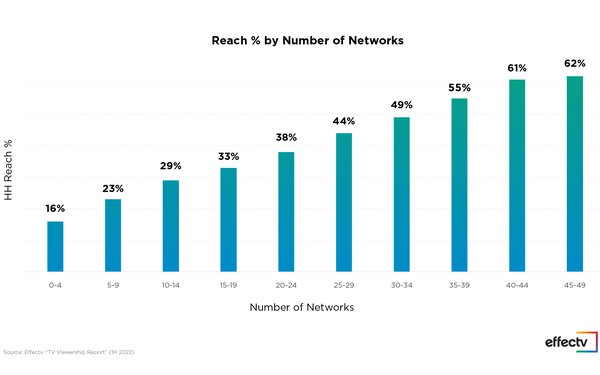 Advertising for cable TV works best when a media campaign is running on 40 to 45 linear TV networks where it can deliver a reach of 62%, according to Effectv.

The Comcast Cable advertising-sales division says this result comes from an analysis of 165,000 campaigns that ran in the first half of 2022.

“This research demonstrates that adding more networks – even as many as 40 to 45 – leads to greater linear TV reach without increasing budget levels, making campaigns more efficient and more effective,” states Travis Flood, director of customer insights of Effectv.

He adds: "Campaigns found a 6% increase in campaign reach for every five networks added.”

At the low end, the report says, buying 20 to 24 networks can provide a collective 38% reach.

One concern that Effectv acknowledges is that TV viewership is fragmenting more than ever, with consumers watching traditional TV for over 6 hours and 17 minutes a day across an average of 29 networks per household.

In addition, the report says, adding 20% to 30% of streaming ad spending is a critical component and can maximize overall campaign reach.