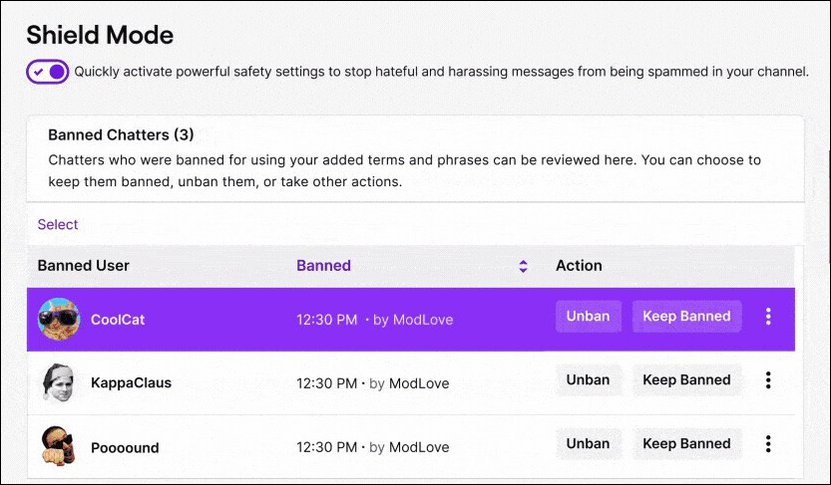 “Shield Mode is a little different from our other safety tools,” wrote Twitch in a recent blog post. “Its real power comes from the way it combines and levels up existing safety tools in one place.”

The company says that Shield Mode allows streamers and their moderators to pre-set multiple safety settings that can be activated with a push of a button (similar to “panic buttons” created by communities that have experienced harassment on Twitch in the past), “turbo-charging their safety settings in seconds” when harassing messages come about.

Setting selections includes prohibiting specific words or phrases from being used in the chat or blocking a first-time chatter from speaking at all. Streamers and moderators can also use Shield Mode to limit chat to followers or subscribers and require verification.

When a harassment or hate raid ends, Shield Mode can be easily deactivated, returning the stream to its previous settings -- a helpful design for streamers attempting to grow their channel without implementing continuous, and limiting, safety precautions.

“We have some powerful safety tools, but we understand that using those tools can mean keeping your community more closed off, or your chat more restricted,” Twitch wrote. “Streamers who need online protection the most — including Black and LGBTQIA+ streamers disproportionately targeted by hate raids— often need online visibility the most. So particularly for underrepresented communities, we hope this will be a first step in helping you keep your community open and welcoming to new members, while also maximizing your safety.”

Twitch also says Shield Mode can be used when streamers are planning a stream on sensitive subject matter, participating in a campaign that will put streamers in the spotlight or being featured on the front page.

Streamers will have to file reports for each banned user -- a process that Twitch says will be streamlined in the future.

Shield Mode may come as an update for advertisers that are concerned about brand safety on emerging platforms like Twitch, which could become a promising outlet for livestream shopping as well as attracting a younger audience.