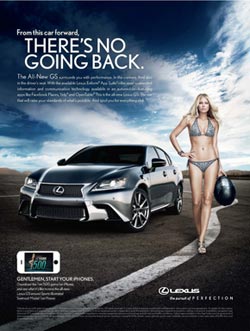 Lexus is continuing its up-shift to a more masculine, performance-oriented proposition with a highly, um, anatomical sponsorship of Sports Illustrated Swimsuit Launch Week.

Lexus is using the campaign, which comprises ads and video assets pertaining to a competitive driving course vaguely shaped like a supine woman, to spotlight the 2013 GS, the sport sedan featured in its Super Bowl ad. The theme of the campaign around the partnership is that the GS can handle all kinds of curves. All kinds.

The campaign called TORI 500 involves a racetrack that is intended as an elaboration of the body lines of Tori Praver, one of the models featured in the swimsuit issue.

The online video at Lexus.com/tori500 or youtube.com/lexus has two pro drivers, racer Scott Pruett and stunt driver Greg Tracy, competing on the TORI 500 track to see which of them gets to take Praver on a test drive around her body.

There is also a four-page spread in the Feb. 14 Sports Illustrated Swimsuit issue and custom tablet integrations on iPad, Samsung Galaxy, Xoom and Nook. Ads, which show Praver in a bikini walking away from the car, say: "From this car forward, there's no going back." The company is also promoting an iPhone app called Supermodeled that lets people insert photos of Praver into pictures they shoot.

The automaker will also be part of the issue's events in New York and Las Vegas, the latter called "SI Swimsuit On Location" and "Club SI Swimsuit." Lexus also serves as presenting sponsor of the inaugural, two-day "Beauties & Beats Music Festival" on Feb. 15 and 16 at The Cosmopolitan of Las Vegas.

Sports Illustrated says the 47-year-old SI Swimsuit Issue program, including the events around it, reach more than 70 million people per year and more 18- to 34-year-old men than the Super Bowl. There are, according to the publisher, some 20 product extensions in digital/social, broadcast, publishing, mobile and consumer products.

The campaign is part of one of Lexus' largest efforts to date. Via El Segundo, Calif.-based TeamOne, it promotes the Lexus lineup as more design forward, more aggressive, and sporty, with the new GS as the poster car. Lexus also touted the GS sedan in the Super Bowl with a spot via San Francisco-based Attik.