Ford Does First-Ever Documentary For Warriors In Pink 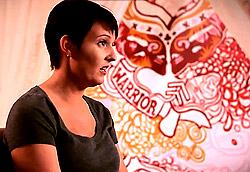 The automaker is using Breast Cancer Awareness month to promote its first-ever documentary about the "Models of Courage," who are the 2012 faces of its six-year-old "Ford Warriors in Pink" funding program. The short documentary, "Bang the Drum: Living Out Loud in the Face of Breast Cancer", focuses on the experiences of the 11 models -- nine women and two men -- who are breast cancer survivors.

The film delves into the personal stories of the eleven, illuminating what a breast cancer diagnosis means and how it motivates -- and explores the experience of being diagnosed, coping with treatments, and relying on support networks.

Tracy Magee, Ford Primary brand experiential marketing manager, tells Marketing Daily that the company captured footage of the 11 "warriors" at events in places like Los Angeles, Houston and New York, and in their hometowns. "In 2006, we created the 'Warriors in Pink' campaign, but up until a year ago we used models. We decided then to use real people -- survivors."

Magee says that since choosing the "warriors," the company had been documenting their experiences and capturing their stories. "We realized at some point that we had a real story line and did film development. We just thought we had a lot to offer."

The 13-minute video went live on Oct. 1 at FordCares.com. Ford, which has delivered some $115 million to cancer research and patient support over the past 18 years, is also showing the film at events throughout the month. But, says Magee, "our primary outreach is the Web site, Facebook, and YouTube --primarily social media."

The central engagement component of "Warriors in Pink" is a line of themed products that has expanded way beyond the scarf that symbolized the program, and which consumers could buy, thereby funding the program. Now, proceeds of sales of the "Warriors in Pink" products can go to one of four charities, among which consumers who buy the products can choose. Magee says sales of the new products are especially strong this month. "This is when we do paid and earned media placements and we have seen really good results so far for all the new apparel this year," she says.

Ford is advertising "Warriors in Pink" with co-branded ads in print pubs, via a partnership with Meredith. "We also have gotten prime-time media on CBS, which is doing PSA's  for us," says Magee, adding that daytime talk shows on the network have featured the Warriors. "Ford sees it as a win-win: we make an impact while same time making an emotional connection around the Ford name."