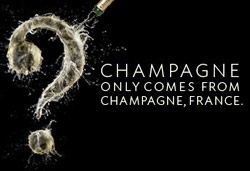 The Champagne Bureau, USA, has launched a national ad campaign as part of a large-scale effort to reclaim its name in the U.S. marketplace.

The sparkling wine Champagne can only come from the region of Champagne, France. The ad campaign is designed to remind consumers of the role location plays in creating wines and to tap into growing American consumer interest in geographic origin.

Posing questions like “Maine Lobster from Kansas?,” the ad reminds consumers of the importance of authenticity and of knowing products’ true origins.

The ad, which will appear in print, outdoor and digital formats and on the bureau’s website,  highlights the gap between American consumers’ growing desire to know the true origins of their purchases and persistent legal loopholes that create confusion about where certain products actually originate.

U.S. consumers are seeking information about how and where their wine and other goods are produced, said Sam Heitner, director of the Champagne Bureau, USA, which represents the growers and houses of Champagne.

“This campaign uses humor and well-understood U.S. location-based products to encourage consumers to take a moment and consider the authenticity of what they are buying,” Heitner said in a release. “U.S. consumers are savvy, and this reminds them to say ‘of course not’ when faced with products that lack authenticity and to seek out products that come from unique places like Champagne from Champagne, France, Maine lobsters from Maine and Napa Valley wines from Napa Valley, California.”

The ad highlights a legal loophole in federal law that allows a few U.S. sparkling wine producers to mislead consumers by labeling their products “Champagne” even though they do not originate from Champagne, France.

In December 2006, Congress passed legislation banning the future misuse of 16 wine place names, including Champagne. While that seemed a step in the right direction, the legislation did not address the grandfathering of labels currently misusing Champagne’s name and those of 15 other wine regions. Almost half of the bottles in stores and restaurants still misuse the Champagne name.