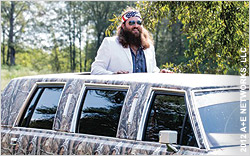 And attorneys wanting to make a buck off your defective bladder sling. There will be reality; there will be verisimilitude. There will be no good way to tell the difference. When you’re living out loud, there is no difference. It will be “Desolation Row” as if Randy Newman wrote the song.

TV reality producer Mark Burnett told Esquire he hates the term “reality television” and prefers “non-fiction programming.” (That sound you just heard was a producer from PBS’ Frontline doing a half-gainer off the Edmund Pettus Bridge and splashing down in the Alabama River.)

Not that Burnett’s wrong; these shows — even the best of them, like CBS’ Amazing Race and Big Brother — aren’t reality. But to say they’re “non-fiction programming” is to say Domino’s makes good pizza.

In the AAA ball of cable television, they are awkwardly choreographed worlds of manufactured tension, interspersed with soundtracks and cityscapes. Move the camera to the left or right and you’ll see a craft service table in the foyer — not that there’s anything wrong with that. I want my life filled with Mark Knopfler guitar riffs, the New York skyline, and a Coleman packed with Diet Snapple.

Brad Adgate, senior vice president and corporate research director of Horizon Media, says, “It’s important to be reminded that reality shows are on television because they are thought to be entertaining. The people who are on it are selected for various reasons: looks, personality, not [being] too intelligent.”

Urban elites get vertigo at the sight of blindfolded children guessing which family member’s breath is hitting them in the face, as was done on TLC’s Here Comes Honey Boo Boo, while Southerners harrumph at those who belittle them for dipping tater tots in the ranch dressing. Of course, if you make a gazillion dollars selling A&E’s Duck Dynasty Commander Copperheads for $179.95, you probably don’t care what anyone says about you or what you put in the Hidden Valley.

Mocking reality television is as easy as taking on BP, but it’s not like the shows are an amorphous blob of pathos and ungrammatical syntax; they resemble more a buffet of vicarious fandom.

Fox’s American Idol, CBS’ Survivor, NBC’s The Voice, Fox’s The X-Factor — we admire them. Bravo’s Real Housewives of Beverly Hills and OrangeCounty — we’re amused by them. (What the hell’s going on in Atlanta and Miami, though?) History’s PawnStars and A&E’s StorageWars — we’d hang with them. VH1’s MobWives and Fox’s TheSwan — we pity them. National Geographic Channel’s AmericanGypsies and A&E’s Hoarders — we fear them.

Dennis Miller, in the last funny thing he ever said, commented that we now have celebrities who can’t even fill their 15 minutes of fame. He was being generous.

During the last half hour of an episode of E!’s Kourtney & Khloe Take Miami, for example, no scene lasted more than a minute, until the last one. The next-to-last four were  :28, :46, :48, and :54, respectively. Kim finds out she’s allergic to her cat; Khloe deals with her addiction to coffee; Kourtney slaps Jonathan; he forgives her in milliseconds after swearing he wouldn’t.

When the action resumes, the previous half of Kim’s scene being convinced she was allergic is repeated; then, she faces the camera and talks about giving up the cat; then, she actually gives up the cat.

And here’s to you, Ms. Kardashian, a nation turns its lonely prurience to you.

Anthropologists can’t observe the tribes in Papua New Guinea collecting wild plants and eating sus papuensis (ocean pig) without affecting behavior, so how can Kimora and Johnny More not be self-conscious when a camera crew films their lunch at Fogo de Chao Churrascaria in House of Fab?

The mother ship at the moment of reality shows is the aforementioned come-smell-my-breath TLC’s Here Comes Honey Boo Boo, a show about, well, God knows what it’s about — either a poor Georgia family holding itself together, or the need for more Family and Child Welfare Services in central Georgia. It was reported the family is earning between $15,000 to $20,000 per episode.

Lily Tomlin once said, “No matter how cynical you are, it’s never enough to keep up,” but Alana Thompson, that’s Boo Boo, is now worth $500,000. She’s no longer a chubby little poor girl from McIntyre, Georgia; she’s got a line of clothing at the TLC Store. I’m not a real Boo Boo anymore, but I play one on TV.

But it’s escapism, right, so what’s the problem? Well, as Joan Didion wrote, “What if you ran away to find yourself and discovered nobody home?”

“Grandma, you were on TLC’s MiamiInk?” These shows don’t kill culture; they numb it.

Carrie Underwood, brilliant singer, but an idol? Tony Romo dumped her! And let’s not put too fine a point on this: MTV’s Teen Mom 2 is the saddest show on television.

The reality landscape is turning inward, a world within a world — like one of those Russian Dolls that keeps revealing another doll. In an episode of BooBoo, Mama June is bragging about all the stars who are now quoting Boo Boo — but can only come up with two: Kim Kardashian and RuPaul — reality stars.

For the love of David Sarnoff, make it stop!

While scripted television purists may be ready to throw the channel changer through their Vizios if one more “real” housewife appears, advertisers are more than happy to follow viewers and the franchise to Boise and Tulsa.

I ask Horizon’s Adgate about content: “It’s like filming 12 hours of ESPN Bassmasters and waiting for the big one to come in.”

The big one rarely does — and even when it does, it’s anticlimactic. We knew Kelsey Grammer left Camille before she did — well, before Camille did. We knew Kris Humphries was a douche-bag before Kim did.

It’s reality, but not in real time.

This too: The fish don’t know they’re on television.