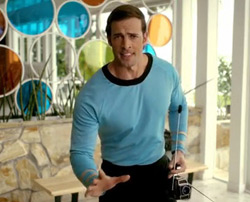 Pepsi Next has tapped Latin actor/heartthrob William Levy to star in humorous videos in English and Spanish.

Levy, a star among Spanish-speaking audiences worldwide through soap operas, reality TV and other work, has also gained visibility with the English-speaking audience through “Dancing With the Stars” and a Jennifer Lopez music video, and is scheduled to appear in an upcoming Tyler Perry movie.

Like previous efforts for the year-old, reduced-sugar, reduced-calorie Pepsi Next, the goal is to encourage consumers to taste-test the drink (“Drink It to Believe it”).

Levy was the perfect choice to “seduce the tastebuds” of both Hispanics and mainstream consumers, says Esperanza Teasdale, senior director, Pepsi Next & TM Pepsi Innovation.

The video shorts (from agency The Barbarian Group) show Levy acting out six over-the-top personas: a rock star, a romantic, an action hero, a sci-fi hero, an aspiring theater actor and a doctor.

A core element of the campaign is “The Wheel of Levy,” a site where consumers can view all six of the videos, and register to receive one of the 400,000 free, two-liter bottles of Pepsi Next being given away (while supplies last). The videos are also viewable on the brand’s YouTube channel.

The Spanish-language version of the romantic video, in which Levy spoofs the passionate Latin stereotype (finding it tough to blow out one of the many candles in the otherwise dark room, for example), is also being used as a television commercial. It will debut on the Billboard Latin Music Awards and also air on Spanish-language television networks, according to Teasdale.

The first English-language TV spot from the videos is also being prepared to appear on national television, she reports.

Pepsi Next is using digital ads, social media, in-store promotions, public relations and a bilingual media tour by Levy to help drive consumers to the Wheel of Levy site and encourage sampling.