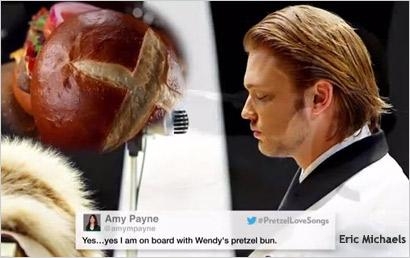 Now that the burger, which features a soft-pretzel bun, is being officially rolled out (so to speak), the chain has tapped Nick Lachey -- the lead singer for boy band 98 Degrees -- and other performers, for videos featuring songs that use fans' tweets as lyrics.

Wendy's staged a live event on July 8, at a midtown Manhattan Wendy's, featuring Lachey performing songs that used some of the tweets generated by the social campaign.

In August, Wendy's will release a "finale" video of Lachey singing more of these songs, which Wendy's has dubbed "pretzel love songs."

In the meantime, Wendy's has posted on its YouTube channel and Facebook page a video of a performer named Eric Michaels (shown above) singing pretzel love songs, and it will release additional videos over the summer of Michaels and another performer (Eboni Fondren) crooning more tweet-inspired tunes.

The new national TV spot shows a young adult guy saying he's okay with doing jury duty because the court is located near what he assumes to be the great "burger pub" where his friends are getting the pretzel burger they're enjoying -- only to find out that the burger is, of course, actually from Wendy's. The spot is a clear appeal to the Millennials that are one key target for the new menu item and its marketing campaign.

The national radio creative takes a similar tack, emphasizing that fans of pub-style burgers can now get them conveniently at their nearest Wendy's.

In a Hispanic TV spot that uses both English and Spanish, a young couple enjoying one of the new burgers finds that they're not alone: The young woman's Hispanic family is sitting nearby, doing the same.

Wendy's reports that for the first time, it is adapting the Hispanic advertising for national U.S. media.