Honda Does Personalized Vines For Summer 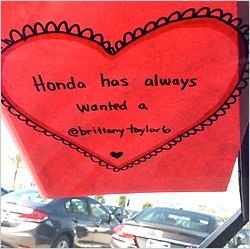 Vine has become a hot spot for marketers, including auto marketers, who are using the short-form video platform to tailor those endless-loop messages to short attention spans.

But Honda is doing it real-time, as part of its summer clearance campaign with Vine videos as responses to tweets. There's even a star connection: a TV component of the company's summer campaign plays off of a tweet message actor Neal Patrick Harris (@ActuallyNPH) floated last month about which minivan he should get.

The just-launched campaign involves, first, getting people to tweet #wantnewcar about why they need a new car, and then responding in real-time with tweets that include personalized Vines. The six-second videos are shot at a dealership in Southern California.

By way of example, a tweet on Monday from @BrittanyTaylor6 said, "I have always wanted a honda!!" @Honda tweeted back, "Good news, @brittanytaylor6, We think you and Honda are a perfect match!" that included a Vine showing an impromptu Valentine card stuck on the windshield of a Honda: "Honda has always wanted a @brittanytaylor6."

Television, print, digital and radio play on the #wantnewcar conversations. The TV spots show Honda dealers (actors) responding to real tweets, including the one from Harris. Another spot touts infotainment apps like Pandora with the dealer doing a Harlem shuffle-style impromptu dance party in a Civic based on a tweet from one @KasiJackson.

Susie Rossick, senior manager of regional marketing at American Honda, tells Marketing Daily that the idea -- a first for Honda -- came from noticing social-media venting about autos. “We noticed an existing conversation on social media with people complaining about their car and, in turn, wanting a new car." She adds that reaching out to customers on Twitter with Vine videos "allows us to extend the television spots into social media while adding a personalized, real-time twist."