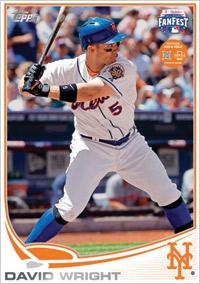 At last week's MLB All-Star FanFest, baseball fans had the opportunity to interact with a next-generation baseball card that brought scale and tech to a new level. Longtime trading card mainstay Topps was there with a set of oversized player cards that had a couple of mobile twists -- namely QR and NFC interactivity. The five two-and-a-half foot by three-and-a-half-foot cards at the Topps booth and around the Jacob K. Javits Conference Center invited fans to scan a QR code or use their NFC-enabled phones to enter contests that awarded boxes of cards to some of the over 100,000 who were expected to attend FanFest.

“We are always looking for ways to make card collecting and the experience around card collecting more relevant,” says Topps Marketing Manager Marc Stephens. The company is only starting to get serious about mobile activations after some too-early testing of AR-enhanced cards years ago. But as smartphones and a range of user-based technologies like QR codes and now NFC are becoming familiar to a wider range of users, Topps is exploring the possibilities. “Mobile devices can take something printed and make it into an experience,” he says.

ScanBuy has partnered with Topps on the FanFest project and will be able to deliver back to them data about how people were interacting with the oversized cards and via which technologies.

The data has not come in yet, but Stephens says he liked what he observed. “We wanted to see if people understood how to use it.” He says that while QR scanning was the predominant interactive mode, he observed a fair number of people using their NFC capabilities.

Topps has a challenge in leveraging mobile technologies because the typical trading card collector is 47 years old and not necessarily an early adopter of technology. “It is important for us to see if he wants to interact with cards in this way,” says Stephens.

The FanFest experience also can work as a test for how scanning can perform in event marketing situations where vendors can continue to engage with attendees while they are there.

Arguably, mobile activation technologies seem a natural fit for trading cards. After all, the card itself -- both the image of the sports figure and the data on back -- are objects of intense scrutiny by fans that beg for augmentation of some kind. I would argue that magazines leveraging mobile activation have a bit of a heavy lift in moving people from page-thumbing analog mode to digital interactive mode.

But the kind of fetishistic attention a fan pays to a favorite trading card strikes me as a mode of interest that slips more easily into mobile activation. Imagine if card scanning made player data dynamic and live, so that a trading card becomes an index that keeps the fan updated on the player or team current performance? Through partnerships with other media companies, these cards could become activators of updated video clips around a given player.

It seems to me one of the promises of mobile activation technology is that it can turn any static piece of analog media into a dynamic, real-time multimedia platform.