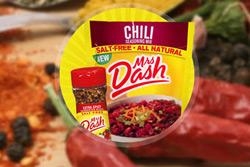 No-salt seasonings brand Mrs. Dash is employing sampling at football games and other venues as part of a new campaign to reach young families, as well as its core audience, with new products.

The brand, acquired by B&G Foods from Unilever in 2011, is investing more than $1 million in advertising and marketing initiatives between August and the end of this year.

Its core audience has been adults 45 and older who want to reduce sodium in their diets. But Mrs. Dash sees opportunities in families with parents ages 30 and up who prefer to control sodium levels and appreciate natural seasonings, reports Joe Villiano, senior brand manager, B&G Foods.

The brand, which has more than 80% of the salt-free dry seasonings market, is known for its shakers of seasoning blends. Now, it has recently introduced a line of salt-free, meal-solution seasoning mixes, and has reformulated and relaunched its line of salt-free marinades.

To introduce the seasoning packets -- which include party-friendly flavors like chili, taco, fajita and dips, as well as meatloaf, beef stew and other family meal favorites -- will give out samples of Mrs. Dash-seasoned recipes in a Tailgate Tour booth at three major college games this fall. Local sports stars and radio stations are helping the brand build buzz.

In addition, Mrs. Dash will soon introduce a Facebook-based game in which participants can win samples as well as cash prizes (its Facebook page has more than 565,000 "likes"); and it will use News America Marketing to offer samples to consumers targeted through retailer loyalty-card programs.

In total, samples will be distributed to about 275,000 consumers, reports Villiano.

This spring, the brand relaunched MrsDash.com, which now offers more than 1,000 salt-free recipes, links to real-time Facebook and Twitter posts, a blog section, and a dedicated coupons/deals page.