Nissan Returns To The Heisman House 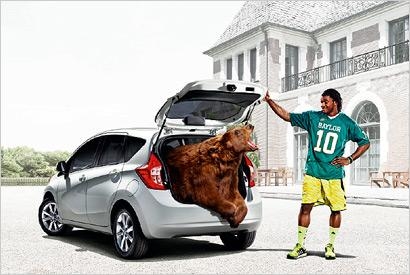 The NCAA football season is here, and you know what that means: Brands converge on loyalty-infused college games like buffalo to a watering hole. But how does a brand stand out? A unique position helps. Nissan has that with its sponsorship of the Heisman Trophy via a partnership with the Heisman Trust, on which the Franklin, Tenn.-based company has had a lock for the past seven years, eight if you include 2013. The deal runs through 2016.

This year, the automaker is back with a comprehensive marketing campaign (AOR TBWA\Chiat\Day) around the Heisman Trophy that puts the brand and its vehicles on broadcasts, at the games, within a media partnership with ESPN, on the Web, and in the house -- the Heisman House, a fictive fraternity-type house where current and former Heisman winners live and harangue each other in humorous 45-second vignettes (one featuring the forthcoming Rogue redesign) that will run during game day and in game broadcasts and online at places like NissanHeismanHouse.com, YouTube, Xbox, ShareThrough, and Nissan’s Facebook page.

Like last year, an experiential at-game program will center on a reproduction of the house itself full of interactive games, and historical exhibits about the Heisman. It will also be something of an ESPN media center with on-stage interviews and other footage. The house will tour to 10 locations throughout the season starting on Aug. 31 at the Kickoff Classic in Dallas, and including the Rose Bowl and BCS National Championship.

This year, Nissan’s partnership with ESPN is a lot deeper, says Jon Brancheau, VP marketing at Nissan's Franklin, Tenn.-based U.S. sales and marketing arm. "We moved closer in our collaboration [with ESPN] in terms of in-game activation," he says. He tells Marketing Daily that in essence, the sports network "assigned one of their journalists to us as kind of our Nissan ambassador at ESPN."

The broadcaster, sports prime-time anchor Neil Everett, will appear on ESPN in short features shot at the Heisman House game venue. "It's a new integration with ESPN that will widely expand our reach."

Nissan's deal with the Heisman Trophy means Nissan gets to cast one vote for the winner. In past seasons, the company crowdsourced the vote via Web site. This year, says Brancheau, Nissan is letting people vote through Twitter at #nissanheismanvote. "Since they don't have to go through a Web site we expect a massive increase in the numbers of people taking advantage of it.

"What we are trying to do is surround the passionate consumers every day of the week," he says, adding that Nissan gets pole position during Saturday night’s Primetime Game of the Week on ESPN, as one of the humorous ads airs right before kickoff. "That's the moment when everyone is glued to the screen." On Saturdays, Heisman House vignettes will also run throughout the day on different networks.

The vehicle getting most of the spotlight is the just-launched Versa Note, which will be on the ground at the Heisman House exhibition. The car will also be integrated into the Heisman House vignettes as well.