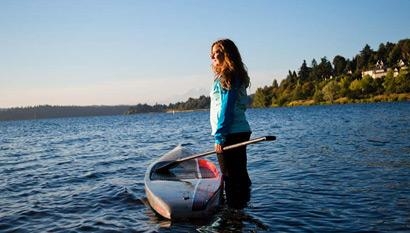 Land Rover is heading into the wild to promote its Range Rover Sport. The company is doing a partnership with Outside that gives the luxury SUV automaker a branded-content hub on the publisher’s properties with custom video within it that focuses on three people who are "driven."

Featured are Sonya Baumstein, the first person to stand-up paddle board the Bering Strait, and who plans to row across the Pacific Ocean from Tokyo to San Francisco; Peter Metcalf, whose company, Black Diamond, produces climbing and skiing gear (that episode will focus on his shop and future designs); and Levison Wood, whose attempt to be the first person to walk the Nile will be documented by Outside. Land Rover will also run the series on its YouTube page and its consumer site. LandRoverUSA.com/Driven from mid-October. There are also print elements and extensions on Outside TV.

Outside Publisher Scott Parmelee tells Marketing Daily that the program, which launched for Land Rover in the October issue, has been a popular platform for automakers in particular. He says Outside has done integrations with five car companies so far. Ford did a series of “Go Do Adventure” videos with an emphasis on family and kids, where audiences could submit video stories of their own. "And we have done work with Jeep and for the Toyota 4Runner. And we are doing something with Nissan right now."

The integration, per Parmelee, lets auto brands line up with personalities “who are pushing the envelope. They have asked for partnerships with vignettes they can play off." He says there is some vehicle integration in the Land Rover program, but it's not over the top. And Land Rover, he says, will extract content from the series for their own properties.

Land Rover’s campaign with Outside is a representative example of branded content, but Parmelee explains that the emphasis is on the content side of the equation. "Even though the program was created by the marketing dept., the editorial team is very involved," he says, adding that Land Rover doesn’t have a heavy hand on Outside’s property, and really serves in a “presented by” capacity. The automaker did choose the people featured, with Outside handing the company a roster of achievers who are meant to evince the "driven" idea. “We gave them seven or eight,” he says, and Land Rover winnowed it down to the final three.