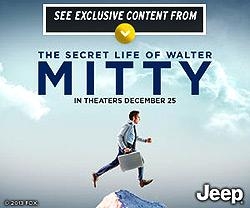 Jeep is putting its Cherokee SUV into the secret life of Walter Mitty, except the secret life in this case is not product placement in the actual 20th Century Fox take on James Thurber’s short story, but making-of content called "The Stunts of Mitty." The effort, developed and distributed by National CineMedia,  includes a :60 cinema spot featuring footage from both the movie and the Cherokee. The program directs audiences to visit Jeep’s YouTube channel to see the "Stunts of Mitty" film, but the effort takes its own Mitty-like journey.

The campaign rides on a distribution network that travels far beyond the traditional in-cinema media footprint -- in NCM's case Regal, AMC and Cinemark. It ventures into NCM's web of digital, mobile and other online partner sites, including mobile, largely to drive audiences to Jeep’s YouTube channel.

Elements include, for instance, a video placement on IMDb; home page roadblocks and takeovers on some 50 entertainment Web sites; banners, including mobile banners; mobile tap 2 video; a :30 pre-roll video in NCM's “FirstLook 5.” (A five-minute online and mobile video version of NCM's FirstLook pre-show.)

Jeep will also be included on “The Secret Life of Walter Mitty” movie partner page with a link to the "The Stunts of Mitty" movie on YouTube. The spot is also running on NCM's traditional in-cinema FirstLook program in front of several films, including "The Hunger Games" and "The Hobbit," and also in movie theater lobbies across NCM’s Lobby Entertainment Network.

Cliff Marks, NCM's president of sales and marketing, tells Marketing Daily that since NCM holds the reins to a distribution portfolio that includes in-cinema, digital, mobile and social, it constitutes its own 360-degree turnkey program. "We bring brands integrated deals in a way that is not unlike ESPN, or The Food Channel, or all-news channels like CNN. People coming to us want to reach a specific consumer. In our case it's the entertainment consumer."

Marks says the Jeep program was the product of a relatively new division at NCM (which has done campaigns for brands like LensCrafters, the U.S. Army, and Sprint) focused on creating integrated multi-touchpoint partnerships. With 20th Century Fox's blessing, NCM pitched Jeep on the exclusive-content idea. "We started a group led by [VP of entertainment  marketing] Rebecca Eldridge specifically for working with the studios to pitch these kinds of concepts to them and allow us to bring them to third party brands," he says. “Most people would identify us as the largest cinema movie network in America but our fastest-growing business is digital. So it's not just movies, but an integrated concept."