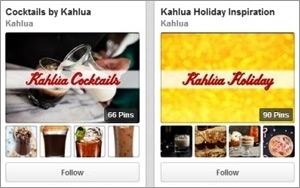 A multifaceted holiday campaign for Kahlua driven by a Pinterest-based sweepstakes and recipe/entertaining content engagement yielded strong results, according to the brand. The campaign also illustrates the overall digital strategy being employed by its parent, Pernod Ricard USA.

The holidays are, of course, prime time for Kahlua, and the brand launched its new Pinterest page in time to leverage it for its 2013 seasonal campaign, “Taste the Spirit of the Holidays.”

As a focal point, Kahlua -- in partnership with Allrecipes.com -- offered a holiday entertaining sweepstakes in which one fan won $5,000 to plan a dream holiday party.

Between Nov. 5 and Dec. 10, consumers could enter the sweeps by visiting www.KahluaHoliday.com; pinning a Kahlua-inspired image representing their idea of "the ultimate holiday party" to a Pinterest board (either by creating a new board or pinning existing or self-generated images to an existing board); and filling out an entry form.

The overall campaign sought to engage Kahlua fans and a broad but qualified prospect base through relevant, practical-use content that would drive both deeper engagement by individuals and sharing across Pinterest and other social channels, says Kerri Owen, brand manager for Pernod Ricard USA liqueurs.

In addition to the Kahlua cocktail and food recipes (including ones using limited-edition Kahlua seasonal flavors) on its holiday site, sweeps entrants were encouraged to follow Kahlua on Pinterest, and to visit Allrecipes.com, for more Kahlua recipes and entertaining ideas, including videos on Allrecipes.com suggesting ways to incorporate the recipes into holiday entertaining.

The sweeps was promoted on Allrecipes.com, and members of the cooking site's voluntary "Allstars" program (site members who are highly active in sharing, rating and reviewing recipes via social media and their own blogs) were given the option of using Kahlua to create their own recipes and spread the word, reports Owen.

The sweeps and Kahlua's recipe content were also promoted on Kahlua's Facebook page, and through digital ads on popular entertaining and shopping sites/apps such as eVite, ZipList and Shopkick (enabling interaction with Kahlua content through those tools ultimately to be linked back to product sales performance data.

Kahlua worked with ad networks/servers and analytics providers to create profiles of the Kahlua prospect and deliver the right content on an ongoing, real-time basis, according to Owen.

While final results are still being compiled, Owen and Tim Murphy, VP digital and media for Pernod Ricard USA, report that the marketing team is confident that the campaign met or exceeded its KPIs, which spanned a number of consumer social, online and email interactions metrics, as well as numbers of off-premise sampling hours and numbers of bottles sold.

According to Kahlua and Curalate (an analytics provider for visual social media that managed the holiday site hub and administered the sweeps on Pinterest as well as gathering and analyzing Pinterest user data for the campaign, says Owen), initial results include:

"Obviously, the more people interact with the brand, the more likely they are to purchase," notes Owen. "When consumers are not only viewing a page but clicking through to blogger content or the mail-in rebate we offered, as well as sharing recipes and pinning and re-pinning them on Pinterest, it indicates the media are working for us."

Murphy adds that the campaign was representative of Pernod Ricard's marketing approach to building deeper engagement with individual brands by employing relevant, targeted content to connect with consumers in a non-intrusive fashion wherever they are -- particularly through digital and mobile channels, and during the ever-more-important time spent on mobile Web browsing.

The company views Pinterest and other newer platforms and technology as new opportunities -- not possible through traditional media -- to understand the consumer's "journey" both on-premise/at point-of-purchase and off-premise, and move them along that journey by delivering relevant content at specific points along the way, Murphy says.

The Kahlua campaign also speaks to Pernod Ricard's commitment to testing new approaches, working with a variety of partners, using what's learned to scale-up strategies that work, and moving on to more testing, he adds.