Super Bowl Play: Subway To Use GIFs, Launch On Tumblr 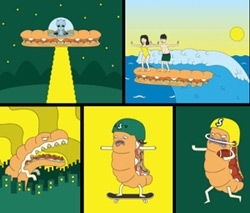 Coming off of a successful Twitter-driven GIF rewards mini-campaign with Giphy that supported its "JanuANY" promotion, Subway plans to leverage GIF power again as part of its Super Bowl Week activities.

During Super Week, Subway will be a returning sponsor of ESPN Radio's Green Room, offering guests who are going on-air for "Mike & Mike" and "The Herd with Colin Cowherd" a replica Subway sandwich counter where they can order up their favorite subs, according to a Subway spokesperson.

Subway will also partner with Giphy for a second time to enable guests to use Giphy's PhotoBooth technology to turn their snaps of the action in the Green Room into GIFs – content that Subway will share out on its social channels throughout the week.

Furthermore, Subway will give the GIF-sharing dynamic a significant boost by launching a branded Tumblr page during SB Week and posting Green Room-gathered content on the new page.

With social sharing and buzz-building as its goal, on Jan. 14, Subway used organic messages/posts on Twitter and Facebook to alert followers/fans that any who tweeted using the hashtag #JanuANY could claim their sub sandwiched-themed GIFs.

Subway worked with Giphy and digital agency 360i to create the unusually large selection of GIFs – 74 – offered on a dedicated area of Giphy (examples shown above).

The brand fueled the buzz by having two of its brand reps/"Famous Fans" — athletes Nastia Liukin and Torah Bright — tweet their own Subway GIFs.

The promo resulted in thousands of tweets on Jan. 14, with #JanuANY trending in the U.S. around mid-day, when participation peaked, reports Subway. Overall, the day was among the brand's strongest thus far for JanuANY social buzz.

While Subway's active promotion of the JanuANY GIFs was limited to Jan. 14, they GIFs will continue to be available on the Giphy site for an indefinite period beyond January.