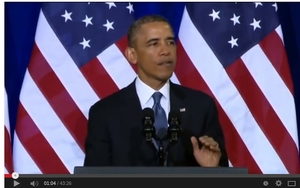 President Obama Friday announced limits on the National Security Agency (NSA) program that reins in collecting data on Americans and bans eavesdropping on the leaders of our nation's close friends and allies.

The vast changes to the government's surveillance program could help to ease tensions among brand marketers and Madison Avenue executives who view the link between data used for online advertising and NSA snooping as damaging.

Calling it the "Snowden Effect," Katherine Albrecht, vice president at proxy free search engine StartPage, believes the advertising industry and their collection of personal information made the data more accessible to the NSA.

"Ad targeting is creating the databases filled with information that allows the government to come along with a letter or back-room threat and take it," she said. "If it's really the case that the companies are collecting the data and using it responsibly only for advertising purposes, then why do they create these databases being used by the government?" asks Albrecht.

Data drives the success of performance marketing, so legislative threats to data collection and stiffer privacy requirements are on the minds of advertising and marketing execs at Rimm-Kaufman Group. The way advertisers use data is less of an issue, and more targeted ads benefit everyone, but the potential for collateral damage is real, says George Gallate, RKG CEO and former CEO at ad agency Havas Worldwide Digital. He said Snowden made data a "dirty word."

Digital media has allowed a new channel of commence to stimulate the economy, and the ability to stimulate that demand continues to become more important for everyone. "Digital is growing very fast; retail, especially in the United States, is a key economic driver," said Gallate. "My concern is that the inappropriate use of data could actually damage what is critical for the economic growth in the United States. I take it very seriously."

Albrecht says that brands pay attention when Google says it can get you the eyeballs for your targeted market, such as everyone interested in skinny dipping in Alaska, while fishing for salmon and hula-hooping. "Ultimately, there's a responsibility for companies not to fund, create or help build systems that perpetuate the erosion of civil liberties and ultimately put the United States in jeopardy," Albrecht said.

However, John Montgomery, COO at GroupM Interaction for North America, believes -- as do others -- that Albrecht took the advertising industry's most feared view. Consumers and brands would begin to think ad targeting pales in significance to the NSA data-collection fiasco, or it would heighten consumers' concerns about data and not allow them to differentiate between benign data for use in ad targeting and intensive NSA snooping and tracking.

It has become clear that Snowden's efforts to uncover the NSA's snooping efforts has made people more confused about online ad targeting. More want to compare data used for targeting advertisements online with identify fraud, credit card theft and NSA surveillance data, explains Montgomery, who runs the privacy task group for the 4As.

"Even in the businesses, there's a huge amount of misunderstanding," he said. "The scenario we hoped for didn't happen, and the scenario we feared has. Each time the NSA gets mentioned in the press, data collection for marketing purposes gets mentioned alongside, Montgomery adds.

Data drives the success of performance marketing, so legislative threats to data collection and stiffer privacy requirements are on the minds of advertising and marketing execs at Rimm-Kaufman Group. The way advertisers use data is less of an issue, more targeted ads benefit everyone, but the potential for collateral damage is real, per George Gallate, RKG CEO and former CEO at ad agency Havas Worldwide Digital. He said Snowden made data a "dirty word," and has concerns that the inappropriate use of data could damage economic growth in the United States.

Gallate calls the NSA fiasco a wake-up call for to the industry to educate others on the care, the collection and the storage of data. "There's a message here related to the privacy rights and data ownership," he said. "Customers benefit from correctly targeted ads. It's the industry's responsibility to explain the difference. As consumers, we must be aware of what we put out there in the public domain, even if it's behind privacy controls."