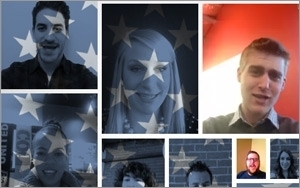 AT&T is looking to bring an entire country together for two weeks during the Olympics with a new app that will enable fans to cheer on U.S. athletes from half a world away.

Via a new app, dedicated digital site and video booths at events around the country, the telecommunications company is encouraging people to upload videos of themselves chanting “U-S-A” as a show of support for the athletes competing in Sochi, Russia. Fans can download AT&T’s ItsOurTime app (available for Android and iOS devices), which will guide them through making a video chant, which can be uploaded to a virtual support wall housed at itsourtime.com, (The messages will also be displayed on a Times Square billboard during the Olympics opening ceremony. Fans can also upload videos from their computers or at video booths at various events around the country.)

“The Olympics are so unique in that you’re coming together as a nation rather than [in support of] a local team,” Kelly Hackett, director of advertising, digital and sponsorships for AT&T, tells Marketing Daily. “Sochi is so far away, and we wanted to enable the support for athletes from far away.”

The “It’s Our Time” theme and hashtag for the campaign are meant to imply a dual meaning of national unity and a recognition of the athletes competing on the world’s biggest stage once every four years. “We felt that was at the heart of what we’re trying to say,” Hackett says. “It works for an individual athlete and it works for the USA.”

The app is part of a digital-led campaign highlighting AT&T’s sponsorship of the 2014 Olympic Team. Through it, fans can also watch AT&T’s national ad campaign for the Olympic games. The commercials depict a day in the life of an Olympic athlete and show how they stay connected with friends and family as they train. Breaking this week, and scheduled to run throughout the games, AT&T’s campaign features athletes such as Noelle Pikus-Pace (skeleton), Justin Reiter (snowboarder), Heath Calhoun (alpine skier) and Alyson Dudek (short-track speed skating). The ads end with a call to action for people to add their cheers to the It’s Our Time social feeds.

Creating a mobile app as the centerpiece for AT&T’s Olympic marketing efforts was in part an acknowledgement that many people will be (and have been) getting Olympics news from sources other than television. The app will be updated regularly throughout the games.

“If you follow someone around, they’re not sitting on the couch watching TV all day,” Hackett says. “Digital is a part of their lives.”