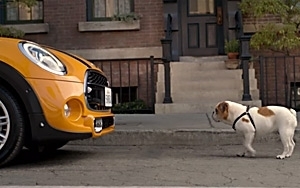 Mini U.S.A. is prepping its largest-ever marketing campaign in support of the latest iteration of its portfolio’s icon, the 2014 Mini Cooper Hardtop, which arrives in dealerships this spring. The car, which first appeared on the scene in 1959, and which represents between 30% and 40% of sales, has been redesigned stem to stern for the first time in seven years.

Tom Salkowsky, marketing department head, MINI U.S.A., tells Marketing Daily that the campaign will involve an array of media channels, including the automaker's biggest TV commitment to date to carry the campaign’s two initial TV spots, one of which is now on YouTube. Mini is handled by Sausalito, Calif.-based Butler, Shine, Stern and Partners (author of T-Mobile’s Super Bowl spot starring Tim Tebow.)

"I think it's fair to say this is the most anticipated launch in the history of Mini in the U.S.," says Salkowsky, adding that the TV campaign runs for three months starting in April, with an out-of-home program slated for nationwide placement. "We are buying hundreds of billboards, and we are doing radio nationwide and digital on places like Flipboard, Tremor, and Crackle, properties that represent the Mini mindset."

He says the redesign “represents a natural evolution of the model; we are building upon iconic design and that is something consumers value. But it captures modern technological advances in drivetrain and interior features, as well as much more connectivity and overall performance." The car is also four inches longer and maybe half an inch taller. "But again, the face, side profile, and rear are all very, very familiar."

The first ad, "Bullheaded," on Mini’s YouTube channel now, follows a theme the company has used before: a bulldog confronts the new Mini, thinking of it as a kindred spirit. The dog hops in, takes a look around, and he and his owner drive off, during which we see glimpses of what makes the car different, such as the new console interface, heads-up elements, and adaptive headlamps.

The automaker started heating things up after the Los Angeles Auto Show last year, introducing the new tagline for the car, "The New Mini. The New Original," and launching a digital promotion called "Final Test Test Drive" where past and present Mini owners could vie for a chance to have their dream test-drive come true, with themselves behind the wheel and a film crew documenting the experience.

An experiential component of the campaign is subsumed into the "Mini Takes the States" ride and drive program from July 26 to Aug. 9. The program, in its fourth year, will visit 16 cities, starting in San Francisco and wrapping up in Boston, per Salkowsky. "North of 7,000 people will participate,” he says, adding that for the new Hardtop in particular, experiential is an important part of the strategy, as the vehicle has big interior differences including a new connected-car/infotainment system -- elements that one can’t really experience from afar.

The company is also mulling a grassroots program where consumers can test-drive the Hardtop against the competitive set. "We have done this before, but we would do it in an original way, and invite more prospects," says Salkowski. And the company is continuing its global partnership with Burton snowboards, Channel Island surfboards, and Red Bull, with the latter to participate in a forthcoming extension of the “Final, Final Test Drive” program. Athletes will be involved.

Separately, long-time BMW and Mini marketing executive Jim McDowell, who in 2005 took the reins of Mini, retired at the end of 2013. He was replaced last month by David Duncan.