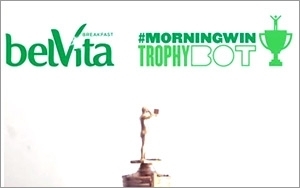 Mondelez International's BelVita Breakfast Biscuits brand is running a campaign that celebrates large and small "morning wins" through Twitter, a TV ad, radio promotions, branded content partnerships and -- in what appears to be a first -- by using 3D printing to create personalized virtual and real trophies.

For the first two weeks of the campaign, some consumers who shared their morning wins (like getting the kids to school, or finding matching socks) on Twitter at @belVita with the hashtag #MorningWin were selected to receive a personalized certificate, a virtual 3D trophy and/or a real trophy, and a video of the trophy being created.

Agency Droga5 set up a lab/retail storefront on New York's Lower East Side (shown above) to create the trophies. The lab was being staffed by a team including several creatives, data analysts, social strategists, video editors, trophy builders, trophy models, and others. Consumers were encouraged to come watch the trophies being created (the lab kicked off with a promoted trend on Twitter).

The campaign's 30-second national TV spot is also viewable on YouTube. Dubbed "Susan's morning win," the ad, like the other campaign elements, conveys how individuals use the "steady energy, all morning long" provided by BelVita biscuits to power their mornings.

The humorous spot shows a young woman's jam-packed morning, including blogging, avoiding a traffic ticket, working out at the gym, and perpetrating a faux pas during a client teleconference at her job.

The campaign also included partnerships with morning radio stations. Listeners were encouraged to share their #morningwin; these were then turned into weekly morning win songs.

Other elements include a content integration with CollegeHumor and a partnership with The Audience to secure celebrity influencers to tweet and broaden the campaign's reach.