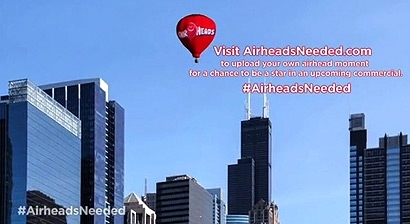 As part of its first national campaign wooing Millennials, Airheads candy is running a user-generated video contest in which the winners will be featured in new TV ads.

The brand, which has traditionally targeted a younger, more niche audience with its advertising, in February launched a major new campaign dubbed "The World Needs More Airheads."

Now, Airheads is using a contest to recruit fan-created videos. Fans can enter by uploading their Vines, YouTube or Instagram videos or animated GIFs by April 21 on the contest's "Airheads Needed" contest Tumblr site.

Three winning short videos capturing a humorous "oops" moment or "an amazingly airheaded idea" will be chosen for inclusion in at least one of Airheads's new, 15-second commercials. Others will be used in mobile and online ads. (Brand-screened video entries are also being featured in a gallery on the Airheads Needed site.)

The new TV ads will be airing between June and September.

To kick off the contest, Airheads staged its own "airhead moment." On April 4, the brand surprised Chicagoans by landing an Airheads promotional hot air balloon in Millennium Park (normally a hot air balloon-free zone).

Airheads featured photos of the stunt on its social media assets and a video of it on YouTube (screen capture shown above). Local media outlets' pick-ups of the event helped drive buzz.

The brand is also encouraging fans to use the hashtag #AirheadsNeeded when sharing on social channels.

In addition to leveraging social media, the campaign is also employing SEO and public relations.