Restaurant Reviews Tell Us More Than What We Think We Know 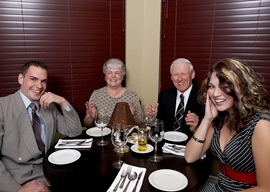 Restaurant reviews not only tell us if we're eating healthy, but provide insight into the minds of consumers. Certain words show the foods connected with addictive personalities; while others are comforting and calming. A study that appeared in the April issue of the journal First Monday provides examples of how scientists could begin using online review tools at sites like Google+, Facebook and Yelp to predict future psychological ailments, depression, and more.

Could -- and should -- marketers use these reviews in an audience segment to target other types of products and services?

The study uses software to analyze nearly 900,000 reviews of 6,548 restaurants from fast food to luxury restaurants on Yelp.com. It examines online reviews from 32 categories of restaurants, which reveal more about the people who wrote them than their thoughts on the eateries in Boston, Chicago, Los Angeles, New York, Philadelphia, San Francisco and Washington, D.C.

The group studied the hidden meanings in the way people use words and connotations, tapping techniques from computational linguistics and sentiment analysis to measure characteristics in the number of words, the use of specific pronouns or the number of times that words appear from specialized lexicons. The results suggest the social psychological well-being of those who are writing and posting the reviews.

The researchers conclude that positive reviews -- mostly reviews of expensive restaurants -- tend to use metaphors for sex and sensual pleasure. The words used in those reviews were more complex and longer. Most are associated with a higher socioeconomic class. The reviewer's self–depiction portrayed them as well–educated. "By using the metaphor of sexuality and sensuality in these long reviews the reviewer further portrays themselves as a food lover attuned to the sensual and hedonic element of cuisine," per the study.

On the other hand, positive reviews of less expensive restaurants often used metaphors related to drugs or addiction to describe the experience. Women were more likely than men to use drug metaphors to describe their attitudes toward food, which might mean that more women suffer from depression compared with men. Negative reviews were associated with personal trauma and poor customer service.

Let's have a shout-out to the ScienceBlog for calling attention to the study.