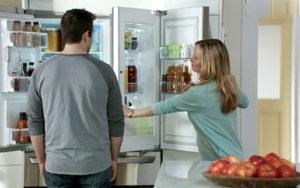 Moms' inner voices are audible in a new campaign for LG Home Appliances touting its refrigerators, cooking appliances, dishwashers and washers/dryers. The humorous campaign, “Mom’s Inner Voice,” rolling out over the next six months, aims to tell the tale of multitasking moms through their thoughts, as articulated by actress Leslie Mann of "The 40 Year Old Virgin" and "The Cable Guy."

One of the new TV spots focuses on the company's LG Studio French-door refrigerator. The spot has a mom noticing that her husband is more interested in what’s in the fridge than he is in her. “Even when you make it easy and put the good stuff front and center, he doesn’t see it,” she thinks. So she sashays up and opens the fridge doors for him. "Ooh, hello there," he says, seductively. “That’s what I’m talkin’ about.” Turns out he's enthralled by the presence of his favorite beverage.

Besides TV spots, the campaign, developed by Hill Holliday, features Hulu content and video assets on sharing platforms and the usual social suspects Facebook, Twitter, and Tumblr at #momconfessions. LG says the effort also involves deals with PureWow and BuzzFeed, and is featured on LG's home page. "Life's Good" remains the umbrella tag.

The company says all social components drive consumers to a dedicated Tumblr page where moms can read other #momconfessions and share their own. New York’s Times Square was the site of an out-of-home launch element on Mother's Day, wherein real moms' confessions were showcased on the LG billboard.

It’s a good go-to-market time for high-end and technologically advanced appliances as things are picking up for the category. Majaps (to use the official handle for the business) had been a reliable, if flat, market for years before getting absolutely pummeled by the recession. But since then there's been a solid uptick. A March Mintel report on the sector shows a 5% increase in sales last year due in part to renovations, housing starts and moving. The firm, whose conclusions are based on the U.S. Bureau of Labor Statistics data and Mintel's own Consumer Expenditure Survey, sees the trend continuing from $14.2 billion last year to $16.4 by 2018.

Mintel notes that innovations in the category are helping drive replacement sales, especially as products with new features as well as improvements in energy efficiency and reliability come to market.