The BET Awards Kick Off Summer Of Ford 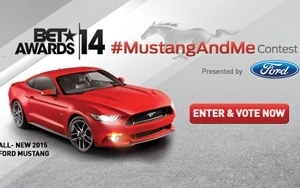 Ford is back as sponsor of the 14th annual BET Awards on June 29, where it will advertise, have vehicles on display and running a social promotion dangling a Mustang at #MustangAndMe. As part of the latter, which is one of the programs celebrating the 50th anniversary of the car, the grand prize winner will be announced during the live broadcast. To vie for the car, participants have to create a 60-second video to showcase how they embody freedom and spirit.

Ford has been with the awards show (of which Chris Rock will be host this year) as a sponsor for about six years, with different vehicles getting the focus each year, per Shawn Thompson, manager of Ford multicultural marketing. She adds that this is the first time Ford has featured the Mustang as part of its involvement with the awards show. She tells Marketing Daily that the program includes advertising around the BET broadcast with creative via UniWorld focusing on Fusion.

Thompson says the BET Awards program kicks off a lineup experiential Ford plans this summer featuring vehicles on the ground at major events. Ford, which has had a multi-year sponsorship of the Essence Music Festival, will be at the event in New Orleans on July 4. Ford will also be on site at the Bronner Brothers International Hair Show, a multicultural trade show that brings in some 50,000 people to Atlanta in early August. And Ford sponsors will be on hand at Steve Harvey's Neighborhood Awards show -- also in Atlanta, per Thompson.

"We will have vehicles at most of these and we'll also offer ride and drives," she says, "And we will be giving away vehicles at all of them. It's an exciting summer for us because they are all back to back."

Ford will also launch new advertising around the BET broadcast as part of a total-market campaign that includes diversity efforts for both the African American and Hispanic markets. "We are going into a total-market approach, so it's a combination of Team Detroit, UniWorld Group, and Zubi Advertising."