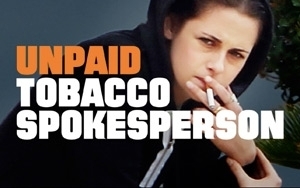 The Legacy Foundation's Truth campaign advertised on the MTV Video Music Awards Sunday night as part of its new campaign, Finish It, is intended to get teens more involved in efforts to get peers to avoid cigarettes, and not promulgate the idea that smoking is cool by posting photos of people with cigarettes.

The effort focuses on the fact that Big Tobacco gets free ads when people are photographed smoking, especially when they are celebrities.

The campaign features two new TV spots that broke during the VMA’s. The ads -- with the message, "They're the new face of Big Tobacco, and they don't even know it" -- are a rapid montage of celebrities smoking, or with cigarettes dangling from their mouths.

Truth also redesigned Thetruth.com to reflect the campaign: it has an optimistic empowerment message that youth smoking is decreasing rapidly, and offers tools that visitors can bring to their own social channels. One is called " X Your Profile," essentially a social profile badge that identifies a person as an anti-smoking advocate; sharable content that x's out cigarette imagery from photos on social media, and encourages people to replace cigarette-related images with other images.

"What we realized that is that there is an opportunity not only to engage the 9% of teens who are smoking — and of course they are still a huge, important part of the target — but to influence the 91% who are their peers and bring them onboard, and empower them to use their creativity," says Robin Koval, president and CEO of Legacy. "When you go online and Google images of smoking you see entire Tumblr pages devoted to glamorized photos, people with great influence, smoking. And every time you put an image up here that glamorizes smoking, you become a spokesperson for tobacco."

She tells Marketing Daily that while Truth has advertised on the VMA's before,"this is our largest participation in while." The organization says the media buy targets the 35 million or so 15 to 21 year olds in the U.S..

The campaign, via Legacy's agency 72andSunny, runs through the year with an extended buy for the TV spots, integrations with TV programming, online branded integrations with online youth networks and personalities, social networks, online radio, search, and video. There will also be in-cinema buys, and activation around the Truth tour, which travels with the Vans Warped Tour, and appears at several Vans events, such as Vans US Open of Surfing and Vans House Parties in Brooklyn. It also visits venues like Six Flags and Major League Gaming.

Legacy claims there are 450,000 fewer smokers as a direct result of the Truth campaign and that teens who are aware of Truth are twice as likely to say they do not intend to smoke in the future.

Kovals says that even though youth smoking rates have dropped from 23% to 9% since the campaign began in the early 2000s, exhorting teens not to pick up the habit is a constant challenge. "Big tobacco spends $9 billion every year, to find 1,200 replacement smokers every day. And they want these people to be young."