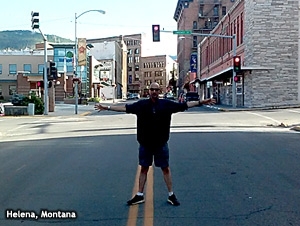 We live in big cities, but yearn for wide open spaces, whether or not we could live there for more than a week before going crazy. Harley-Davidson and Best Western invited five journalists out to Montana to ride motorcycles through the state, including over the Going to the Sun Road and into the vast Martian landscape east of the Continental Divide.

I got an invite, and couldn't resist. As a rider myself, the chance to do a cruise like was too much to resist. The experience was instructive, not just about motorcycles and the touring bike experience, and western hospitality versus the New York variety (the people of Montana are really hospitable), but about what most of America looks like: Shelby, Mont., population around 3,000, is booming by high plains standards. Some of the towns we rode through were silent, and seemed forgotten and shuttered.

Even the capitol city, Helena, felt oddly abandoned, at least from an easterner’s perspective. All flights to the airport are regional, and the terminal is about the size of a split-level house.

Combine the 2012 populations of greater Denver and the entire state of Utah and you’re a little north of the NYC boroughs of Brooklyn and Queens. And Montana? It’s the fourth-largest state in the U.S., geographically. You could probably fit three New York States within its borders, but it's population is about a 20th of the Empire State’s, and less than an eighth that of New York City.

Though we were riding Harley-Davidsons in Big Sky country, the company has, like everyone else in that space, been focusing for the above reasons on urban markets and diversity. Per company stats, Harley is the number one brand for African Americans, Hispanics, and young people, and has been for six straight years through 2013. That is where the marketing should be, since the Caucasian male population, still the base of Harley-Davidson ridership, is going the way of rural America.

A big difference from how the company used to market. Riding through Montana, I couldn't help recalling Harley-Davidson advertising in the early 2000's, where the terrain we rode through dominated creative. Ads showed H-D motorcycles posing on mountain ridges, and against a backdrop of buttes and prairies.

Now both Harley-Davidson (particularly with the Dark Custom bikes) and its distant sales competitors, including Yamaha's Star Motorcycle line, and Suzuki Boulevard put creative squarely in downtown Milwaukee, or Philly, or L.A., or any gritty urban market. The exception are Harley's own touring bikes, including its Rushmore sub-brand, and competitor Honda’s Gold Wing touring motorcycles.

As for my experience out west, I was initially wary about the whole thing. My wife urged me not to go because I'd never ridden a Harley-Davidson and was a bit reticent about swinging a leg over a big bike like that. I was afraid I'd drop it, moving or not, or worse. Well, I didn't have an accident — never came close — but I did (kind of) drop the Heritage Softail I rode. As we lined our bikes up in front of the Best Western in Helena for a photo op, I thought I had put the kickstand down. An embarrassing moment.

That said, and much to my surprise, after two hours I was completely comfortable and would have been happy to soldier on once we'd reached the day’s Best Western. (Full disclosure: Best Western organized this event because they are promoting their motorcycle-friendly policy. That may say as much about the executives as it is about the business — there aren’t that many riders in the U.S. The executives driving the program, like the company’s CMO, are into bikes.)

The greater point, and probably the reason Harley-Davidson and some of its competitors — not to mention most car companies — still do, in fact, show people riding the great open landscape of the west is that open country is still a metaphor for American wanderlust. Yes, we are becoming an urban mega-city society, but the idea persists that one can throw a leg over a bike, or load up a van, and head west, young man. Leave Metuchen behind, and find oneself zinging down twisting roads onto the high plains, or flying down the blacktop with a 75 mph (okay, 85 mph) wind in your face, and bugs in your teeth, as you head toward the grain silos and welcoming committee of Shelby.

Karl Greenberg writes about automotive, consumer-packaged-goods, sports, and travel for “Marketing Daily.” Prior to this, he was the automotive editor at "Brandweek" magazine. He was also the Internet advertising technology writer for "Adweek," and petrochemical editor at "Chemical Market Reporter". You can reach Karl at karl@mediapost.com.